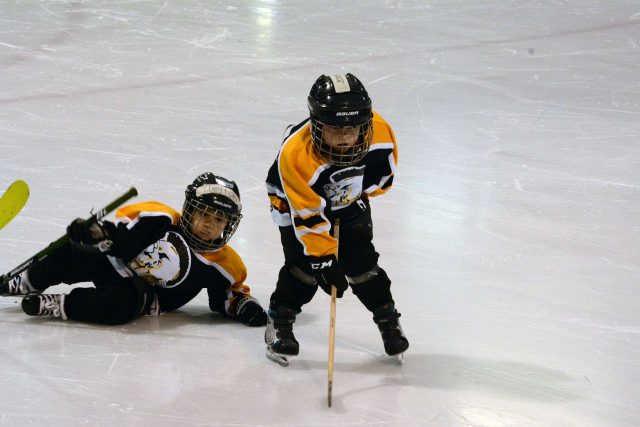 The youngest hockey players in the community need to develop a love for the game and dedication to commitment early, if they are to have any hope as they grow into the sport, according to coaches and managers in Kahnawake. (Daniel J. Rowe, The Eastern Door)

Each week, either Kahnawake Minor Hockey Association president Peter “Pitt” Jacobs or Lou Ann Stacey send local media the scores for the minor hockey games from the prior weekend.

The scores in recent years have reflected a worrying trend that resulted in zero championship banners this year, the same as last year.

Hockey Quebec’s continually-changing mandate and motivation, decline in numbers, stacked teams in other organizations, and an increase in travel distance, are some of the reasons Kahnawake has struggled to put competitive teams on the ice at all levels.

What can be done to shift this trend?

The Eastern Door spoke to players, coaches, parents and managers to get a feel for what they think is needed for young athletes to improve and thrive in the sport.

Stacey has been involved with minor hockey for over 30 years, and has watched generations of players learn and develop.

Kahnawake is not the only association struggling, as Hockey Quebec is focused on developing double and triple-letter teams to compete on a national stage.

The result is stacked teams in certain organizations, while smaller ones like Kahnawake are left staring at lopsided scoreboards.

“I know people say it’s not all about winning and they’re right, but it helps,” said Stacey. “Our kids are getting blown out, and we’re not the only ones, so there’s something wrong, possibly, with the system.”

The 30 West league includes teams from Kahnawake, Mercier, Ile Perrot, Huntington, Valleyfield and other communities in the region.

In prior years, Kahnawake played in the Suroit region with just Mercier, Chateauguay and Ste. Martine, meaning more or less, the communities’ populations were similar.

Novice A coach Ronnie Stacey feels the smaller organizations need a stronger voice in the league.

“Minor hockey, from MAGH to Peewee, is supposed to be about creating and developing players to love and appreciate the game by having fun,” he said. “Being placed in a position where you cannot compete at your own level, and constantly losing is not fun. Being blown out by organizations that create teams from two or more cities/towns combined is not just not fun, it’s humiliating.”

Ronnie Stacey said the organization as a whole needs to bring this to the highest levels or face having coaches and players drop out of the sport.

“They didn’t do it this year, and this season is going to have a very negative impact on all our young players up through Bantam even,” said Ronnie. “It’s sad to say, but the move to this new 30 West league is going to tear Kahnawake Minor Hockey down over the next three years of this arrangement.”

Ronnie suggested the possibility of combining organizations with a neighbouring community to increase the talent pool and create more balanced teams.

“Or we keep pushing and trying to compete against the odds until our last players throw in the towel and hockey is a thing for the elite in Kahnawake,” he said.

Ronnie Stacey is among those in Kahnawake who sacrifices his time, weekends and energy to help kids develop skills on the ice.

He is not alone among bench bosses from town that had to watch the scoreboard get turned off as other teams ran up the score on his kids.

“It’s hard to keep the kids motivated,” he said. “Knowing your chances of winning were next to zero, I gave them personal goals to focus on and tasks and accomplishments to go for during the games, but no matter what you say or do, you can’t blind a kid from the scoreboard. They’re not stupid.”

Pitt Jacobs made lesson plans for all coaches at all levels to follow, which was meant to help, and Lou Ann Stacey said the organization is intent on helping coaches develop as well.

“Whether coaches used it or not, I can’t tell you,” said Stacey. “We talked about how do we help the coaches, so they can be more effective, and how to help them because it’s not easy. Coaching kids has changed a lot over the years.”

Effective teams practice on and off the ice, do team-building exercises, and work on helping each link in the chain be as strong as possible.

“In order to make a team, that’s what a team sport is all about, even at the lower levels,” said Stacey. “It’s not one or two kids carrying your team.”

Ronnie hopes his team’s winless record this year will be countered by what individual players have learned.

“All I can hope for is that by accomplishing their small tasks on the ice is enough to keep them motivated not to quit,” he said.

Parents are a vital component to any minor sport.

They are the ones footing the bill, sitting in the stands and driving their kids to practices, games, tournaments, and other events.

Parents stepped up and got involved and the team wound up coming second in the playoffs, having improved in strides over the season.

“His whole coaching staff was all brand new,” said LouAnn. “He didn’t have anything, and he didn’t pick his team, he was given his team, and to me that’s real learning.”

Parents can be demanding and vocal in support of their children, but, Lou Ann and others reminded, need to know what they put into their kids’ progress will come back in quality on the ice.

“With players rarely coming, it’s impossible to develop a player’s skills and knowledge of the game,” said Horne.”Parents and players show up when they feel like it causing many teams to either forfeit or lay short benched.”

The work, for coach and parent Conner Stacey, should continue at home.

“Parents could take more time to teach the kids the game at home,” said Conner, who plays on an outdoor rink across the street from his home. “All it takes is a driveway or street. Even just to sit and watch a game.”

“Town should do hockey camps for the young ones like stick handling drills and skating,” said Midget A forward Koleton Marquis, who just finished his final year in the system.

Marquis will go to prep school next year to play at a higher level, and knows working on specific skills in dedicated days will improve overall play dramatically.

“Camps – that’d be good, and that will make the kids so much better,” he said.

“They really helped all the goalies, but this year we had so many teams that we didn’t have a chance to get it put back in, but that helped,” she said.

Power skating clinics are another possibility that would help particularly for the youngest skaters.

For clinics, however, ice is needed, bringing up one of the most common complaints from everyone who plays hockey.

“We need to somehow find more ice time for our players,” said Martin Stacey, who watched his son Dylan play on one of the finest Midget teams in recent memory, and also has a younger one (Martin Jr.) on the Bantam A team.

“One practice per week is not enough if we want Kahnawake to be competitive throughout all the divisions.”

Of course players need to show up to those practices.

Coaches in all sports and all communities will have rosters full of those eager to practice, showing up with regularity, and those that only lace up for the games, and Kahnawake is no different.

“That, to me, is a big issue,” said Lou Ann. “Not everybody has the same interest or passion for it.”