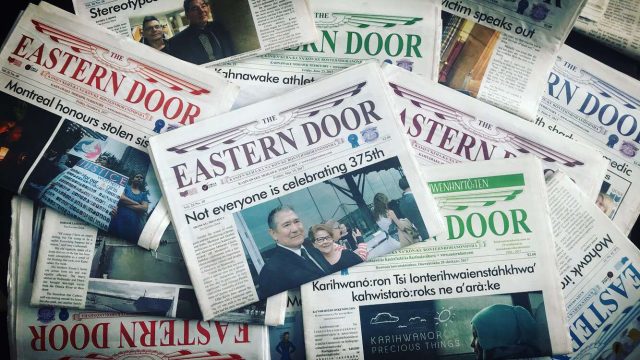 This year promises to be a banner one for The Eastern Door, as the Quebec Community Newspapers Association announced its awards short list, and we’ll be competing for 18 of them – the most by any newspaper this year.

“I am so proud of my staff, no matter where they finish in the top three June 8 at the Mont Gabriel Resort and Spa in Sainte Adele,” said editor/publisher Steve Bonspiel. “Just to be nominated is an honour and we’re up for some pretty big ones.”

“Onkwehón:we people across Canada have endured a longstanding history of having their voices absent in journalism, so I’m incredibly proud to be a part of such an awesome squad at The Eastern Door that creates space for stories about Onkwehón:we perspectives on all sorts of issues that affect us,” said Deer.

“To have that work recognized is really important, and I think the slew of nominations we receive year after year proves that telling these stories truly matter deeply to us.”

“It was so exciting to see how many nominations The Eastern Door crew got this year,” said assistant editor Daniel J. Rowe. “Few know how stressful this job can be unless you’re doing it, and Jessica deserves every nomination she got, in addition to the trouper interns that trek across the bridge to learn and work for free.

“I’m proud to work alongside these three talented females, and hope they win each award they’re nominated for.”

“I can’t say enough about the tireless work and dogged effort all of our staff put in to make The Eastern Door happen week in, week out, 51 weeks a year,” said Bonspiel.

“And for our reporters to be up for so many awards in the same year – it makes me feel like a proud papa, knowing the trials and tribulations, the court dates, the nights and weekends worked, the sacrifices they have to make throughout the year to get the story to you.”

Bonspiel is up for the Bob Phillips award for best general editorial, his sole nomination, while former interns Franca Mignacca (two nominations) and Ambre Giovanni (one, for best news photo) will also be competing up north this summer.

Dana Marquis is also up, in a shared nomination with Deer and Rowe, for best headline writing; an opportunity she relishes.

“It’s fun to help out writing headlines. At the end of a long day we get to play around a bit. It’s pretty amusing,” she said.