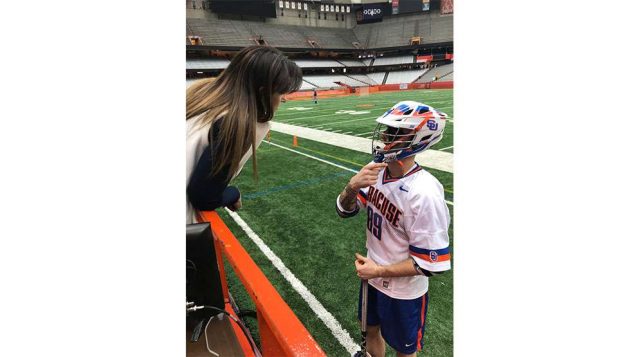 Rookie Orangeman Troy Lauder gets a word of support from his mom Isabelle Nicholas before the 20-year-old’s first Div. I game. (Courtesy Kaniehtawaks Lauder)

March 10 at Syracuse University’s Carrier Dome, Troy Lauder got his first brief taste of NCAA Division I field lacrosse. Sunday at Rutgers University, Lauder did not make the game sheet.

The games signify the journey of many rookie laxers looking to get top minutes on a Div I team.

Before the freshman midfield/attack laxer whose mom is from Kanesatake and dad from Kahnawake played in a game this year, he had to learn a tough lesson of collegial sports at the top level.

In pre-season, Lauder was following a defenseman about to pass the ball. He checked his bottom hand, and the defender’s motion changed from throwing the second Lauder hit his hand.

“It kind of catapulted and he punched me as hard as he could on top of my head,” he said. “I remember going dizzy and was like, ‘I’m fine. I’m fine,’ but the next few days were a huge blur.”

He went to workouts, but when a teammate caught him staring at a wall for about 10 minutes, it was clear, Lauder had a concussion.

The injury meant sitting for Syracuse’s first three games and losing whatever chance he had of playing prominent minutes in his first game back Saturday.

Lauder played around three minutes in Syracuse’s 18-7 loss to John Hopkins, and admitted that missing the first four games was not easy.

“It was such a challenge,” he said. “College and high school are a lot different in the fact of, if you’re not ready and able to play, it’s ‘next!’ It’s not like ‘okay we’ll work with them.’ It’s like, ‘we have this player who was always a step under you and he’s healthy.’ Boom.”

Four games are tough, but missing an entire season is a very different bag of frustration. Albany University’s Cougar Kirby underwent surgery in his freshman year, causing the Kahnawa’kehró:non to miss the entire year.

“My experience as a rookie was a little tough because of the surgery,” said the Great Dane Junior. “I think the biggest support was my teammates because they would ask me every day if I’m going to treatment and getting in my physical therapy sessions.”

Kirby said his grandparents in his mother’s Tsawout community in BC were extremely helpful and supportive.

“If it was getting really hard for me, I would just give them a call,” said Kirby. “And I can’t forget the communities, Kahnawake and Tsawout, for always being there. It felt really good to know that everyone was following my story and asking how it’s going.”

For Lauder, the injury meant learning the harsh reality that every single player on the Orangemen roster was a star in high school, and is ready to get on the field and play.

“I look at it now as a motivating factor. The first few games, sure I missed, but with the rest of my career at least I have that speed bump to realize it’s not Billings anymore,” said Lauder.

Syracuse’s 14-10 loss to Rutgers dropped the Orangemen to 3-3 on the season.  The school was 13 in the national rankings as of March 12.

The no. 1 seed Albany Great Danes, on the other hand, pulled off an epic comeback against no. 2-ranked Maryland a week ago, scoring five unanswered goals in the fourth quarter to win 11-10, and beat the formerly undefeated Vermont 21-5 Saturday to stay atop the rankings.

Lauder feels his team has the talent to improve, but needs to up its face off game and gain experience against better teams.

“We have a really, really young team,” he said. “We have a really young talented team, and honestly if we put everything together and piece it all together, I guarantee we’re top-five in the country, but everybody has to show up on the same day, and it’s kind of hard when you have a team that’s so young.”

Next up for Syracuse is the no. 3 Duke Blue Devils March Saturday. The Danes of Albany play Canisius tomorrow and UMass Saturday.

Syracuse, like Albany, has a solid contingent of Haudenosaunee laxers. Brendan Bomberry is in his final year at the school, and Tyson Bomberry is a junior.

Lauder keeps his head down and knows he’ll get playing time as he continues the hard work in practice and training.

“They keep telling me ‘keep grinding, keep doing what you’re doing in practice and eventually we’re going to be forced just to put you in,’” said Lauder.

Lauder had some advice for those thinking they’ll go straight from playing in the GMAA to the top line of a Div. I team.

“People don’t fail because they set the bar too high and missed. It’s they set the bar too low and hit,” he said quoting a saying he likes. “Coming in, I thought just based on talent, I’m making it (to the first line). I felt in my heart that I can, but there are other factors at play.

“You can be as talented and driven as you want, but if you’re not there every day, showing up every single day, it’s so hard. Aim high, but realize, there are great players out there, and not be like, ‘I’m from the rez, and we invented lacrosse.’

“There are some kids out there that picked up the stick when they were 10 years old and they are just naturally gifted athletes. Aim high, shoot high, but be humble enough to realize that there are better players.”

Playing on the same field as Gary Gait, Cody Jamieson, Oren Lyons, Jeremy Thompson, and legendary Cleveland Brown Jim Brown is not lost on Lauder, as he suits up for every practice.