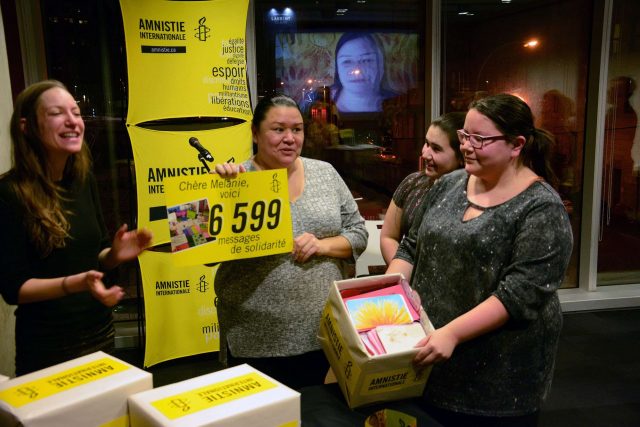 When asking French-speaking people in the region for support, few needed an explanation or a second thought before jotting a note for Melanie Morrison, who Amnesty International chose as their Write for Rights candidate this year. (Daniel J. Rowe, The Eastern Door)

That’s the number of French-speaking and other individuals, couples, families and friends who, though strangers, wrote cards of love, support and encouragement for Melanie Morrison in her determination to help her sister Tiffany.

“Keep up the faith,” wrote one.

“Nous serons vraiment libres lorsque vous serez libérés,” wrote another. (We will be very free when you are free).

The cards were written online and in person as part of Amnesty international Canada’s Write for Rights writing marathon (Marathons d’ecriture: ecrire, ca libere) campaign that chooses 10 people each year, who contribute to human rights campaigns across the world.

Activists this year span the globe from Iran (Golrokh Ebrahimi Iraee) to Madagascar (Clovis Razafimala) to Israel and Palestine (Farid Al Atrash and Issa Amro) in addition to Kahnawake’s Morrison, whose sister disappeared in 2006 at the age of 24, and was found in Kahnawake in 2010.

“It was really amazing,” said Morrison, at the event Wednesday.

Add nearly 6,000 to that number, of people who wrote in or submitted online, and it speaks to how much support French-speaking people in the region and across the province have for Morrison and her fight to draw attention to her sister’s case, and those of the missing and murdered Indigenous women and girls across the country.

“It really strengthens my determination to continue in raising awareness for my sister’s case and the cause for the missing and murdered Indigenous women and girls,” said Morrison.

Gilles Sabourin is a volunteer who manned one of the two kiosks on the south shore (at a book store and library in St. Lambert), and said getting people to write a note or draw a picture of support in December was easy. People wanted to help.

“I would say that the perception people have has changed on the South Shore, in Quebec and Canada in general,” said Sabourin, who’s been part of the Write for Rights campaign for 15 years. “Now, it’s very easy. People have heard about it, they know the situation of the women who’ve disappeared and they want to do something.”

The numbers, said Sabourin, were higher for Morrison than any previous campaign.

Morrison has seen the same increase in support since she started campaigning for justice for Tiffany in 2006.

“When I first started, it was considered an “out west” thing because that’s where the biggest grouping was of these cases, but over the years it became more and more of a reality that it’s across Canada and it’s not just an out west thing.

“I think it’s really eye-opening for the majority of Canadians to know that this is happening in every province, and with the media stepping up and providing coverage of the protests, the vigils, the marches, it’s really helping people to open their minds that this is a crisis in Canada.”

Interim general director of Amnesty International francophone Canada Genevieve Paul introduced Melanie at Wednesday’s event, and said the campaign is part of the education work Amnesty does to draw attention to injustice on a number of issues, including Indigenous women’s fights.

Amnesty was one of the first organizations to draft a letter in 2004 about the missing and murdered epidemic in Canada.

“We’re very, vey happy because first it shows solidarity, but it also sends a message that people care, people care about injustice that Indigenous women face, and it’s important and urgent to take action,” said Paul.

“This is something Amnesty’s been saying for a number of years now. This is yet another demonstration that people care, and that governments have responsibilities that people need to comply with.”

Amnesty works with schools to debunk stereotypical myths and racist attitudes across Canada.

“And really explain the reality and history of Indigenous communities,” Paul added. “I think this really helps and I’m actually very pleased with the response.”

(I support you in your search for truth and justice, and that your sister Tiffany rests in peace in this path you have chosen).

Melanie’s daughters Darian Morrison, 24, and Dara Bordeau, 13, stood beside their mother as she revealed just how many people wrote letters of support.

“It’s really nice to see that a lot of people support my mom,” said Dara, who looks to Melanie as an example and inspiration in addition to being a mom.

What does her mom’s example mean to Dara?

“To never give up and to go for what’s right, and to get as much support as possible,” said Dara. “It’s kind of scary sometimes, and I don’t know how she does it with all the stress and everything. It’s a bit overwhelming.”