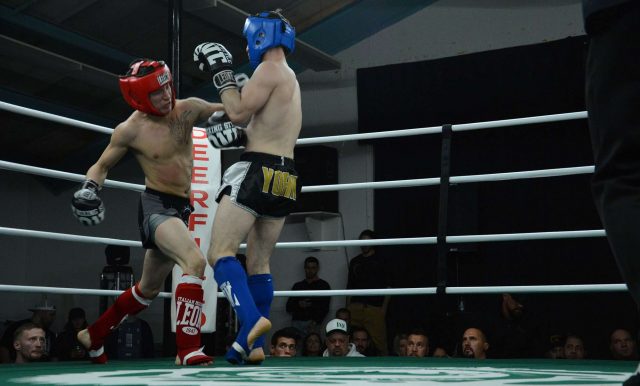 Brad Bomberry was dominant for three rounds as the local kickboxer took the unanimous decision at Saturday night’s Fightquest event at the Knights of Columbus. (Daniel J. Rowe, The Eastern Door)

Exactly 16 seconds into the third fight at Saturday March 3 night’s Fightquest Amateur Combat K1 Kickboxing event at the Knights of Columbus, the crowd got a serious punch of adrenaline after a literal kick to the head.

With all do respect to Kacim Belmihoud’s split decision win over David Hubert Therrien that opened the night of fights, and Jay Turgeon’s win over Peter Lim (also a split decision) that came second, it was Vigneault MMA’s Shane Riches’ right foot to the face of Samuel Mallette that got the crowd going.

“I didn’t have that planned,” said Riches. “I thought it would go at least to the second round so I could showcase the skills I’ve been working on, but, if it’s there, I’ll take it.”

Riches’ corner’s instructions were clear: if he goes for a punch with his left, put a foot to the side of the head.

“He told me right before the fight if he goes south paw, just throw the head kick right away, and it was there,” said Riches.

Riches may be back in the ring in May fighting his original opponent, Cedric Noel, who pulled out at the last minute due to injury. Mallette stepped in to fight in his place.

Riches had nothing but good things to say about training in Kahnawake with the local fighters.

“The training’s great,” said the Chateauguay resident. “I have a lot of great training partners and it’s good motivation. They’re all supportive. Anyone from town is just there to see you do better.”

Riches’ trainer Stephane Vigneault was happy to see his fighter, who is 0-2 in mixed martial arts, win his first kickboxing bout.

“You could not have had a better timing on that kick,” said Vigneault. “Shane trained very hard for the fight and he would have won, whoever he was supposed to fight. He was ready for a three-round war, but he only needed 16 seconds.”

Local fans got loud and proud for the night’s co-main event and second last fight of the night when Bradley Bomberry, out of Harley Muay Thai, fought Antoine Deroo in the 135-pound category.

Bomberry was dominant for three rounds, tagging the Victory Training Centre fighter a number of times with quick and powerful kicks and a number of power punches.

Deroo countered with a couple of powerful kicks, but could never get close enough to Bomberry to rack up any points or do any real damage.

In the end, it was clear who won the fight and the judges agreed, giving Bomberry the unanimous decision.

“I feel good,” said Bomberry after the fight. “I trained hard and hard work pays off. I just had to make sure I kept him out of my range. He had really good kicks though, so it was hard to predict what he was going to do.”

Bomberry now goes to 3-2 as an amateur fighter, and hopes to get a shot at a belt next time, which Vigneault said is a possibility.