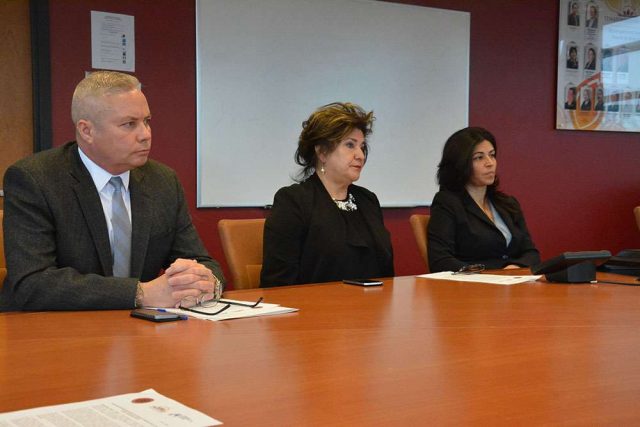 Oliver Montour from the Kahnawake Labor Office, Rhonda Kirby from the MCK, and Tewatohnhi’saktha’s Coreen Delormier have been working for the past months to get more local workers certified to work across the province. (Jessica Deer, The Eastern Door)

Assisting Kanien’kehá:ka workers to integrate into the provincial construction industry is at the heart of a new partnership between the Mohawk Council of Kahnawake (MCK), Tewatohnhi’saktha, and the Commission de la construction du Quebec (CCQ).

“We’ve got a lot of opportunities for our clients and that’s the main goal, to make sure that we have opportunities within our community and outside of the community,” said Coreen Delormier, workforce development officer at Tewatohnhi’saktha.

This endeavour is part of the implementation of the 2014 Labour Agreement signed by the Mohawk Council of Kahnawake and the Quebec government, which transferred the powers and responsibilities to council regarding the qualifications of local workers.

“The collaboration we’ve had certainly has been invaluable to our community. It’s been quite a process since we originally started with the labour agreement,” said council chief Rhonda Kirby, who holds the labour portfolio for the Mohawk Council.

“We see the potential for our community members and we’re really looking forward to continuing the partnership.”

The Eastern Door has covered the developing partnership between the organizations for the past four months, including a single-day course and test in January offered in English for local workers who needed to upgrade their ironworker ticket to include ornamental as well as structural qualification.

Diane Lemieux, the chief executive officer at the CCQ, told The Eastern Door that the partnership was a historical step in building trust between Kahnawake and Quebec’s construction industry.

“We talk a lot within different meetings, different committees, and we learn about each other, and we understand better each reality, so this is a big change.

“This is what is possible to have to this kind of partnership now. I think the Kahnawake workers can have hope for the future,” said Lemieux.

Oliver Montour is the Kahnawake Labor Office’s new certification and competency officer, tasked with enforcing the procedures and assisting those who need to meet criteria to work in the construction industry in and around the community.

He said the partnership with the CCQ has helped remove a lot of the “red tape” and obstacles workers previously encountered when trying to apply for their competency cards to work in the province.

One of the biggest obstacles was having workers’ hours completed in the United States recognized, as well as work done in Kahnawake through businesses not registered with the Regie du batiment du Quebec.

“Previously, the worker had to get a letter from every contractor that he or she worked for. Now, the CCQ is recognizing a letter from the Labor Office. We’re attesting to the work that was done, which is a huge accomplishment,” said Montour.

“Personally, when I got my CCQ card, there was none of this. I went down there, the paper work was long, they’d send you a letter in French that you were rejected; you’d have to go back, more paper work. Everything is so efficient now.

“Anybody that comes to the labour office, we have a direct contact with CCQ, scan and send, and it’s working to our benefit a lot better.”

A monthly working committee was developed to support these efforts and make ongoing recommendations.

“Now, we’re comfortable in telling the community: come to the labor office, come to Tewa, we’re working together if you want to work in the Quebec construction industry, the process is 90 percent easier than it was prior to the signing of the labour agreement,” said Louis Stacey, occupational and safety manager at the Labor Office.

“It’s not the perfect system yet, but we’re close.”