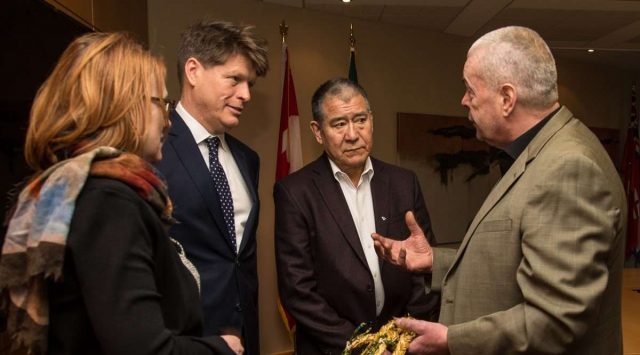 MCK grand chief Joe Norton was in Dublin broadening the community’s relationship with the Irish capital that is interested in learning about local history, culture and issues. (Courtesy MCK)

Mohawk Council of Kahnawake grand chief took some time from a loaded schedule this week to speak with The Eastern Door about taxation, gaming, a meeting with Quebec’s finance minister, and a jaunt to Ireland.

Though Norton did not want to speak about the specifics of the proposal council presented to Quebec minister Carlos J. Leitao regarding fuel tax, he spoke about the bigger issue as he sees it.

“There’s the broader issue here, and that’s the relationship between Kahnawake and Quebec,” said Norton. “That’s the bigger picture and that has to be firmed up and improved into the future.”

Chief political advisor Winona Polson-Lahache did comment on the model council presented to Quebec to get an idea of what something could like in the future regarding fuel tax, but that no one has signed anything or agreed on how fuel tax should work in Kahnawake.

“There’s no agreement or anything concrete like that,” said Polson-Lahache. “It’s still in discussions.”

Nothing has been signed, however, as retailers and council try to figure out a collective position to sit down with Quebec and discuss.

“We’re still really feeling things out and we’re not anywhere close to an agreement I think,” said Polson-Lahache. “The stuff that we were putting forward as a model is going to require some significant change to probably some legislation on the provincial side, so I don’t expect that this is something they’re going to be able to move on too quickly.”

The MCK and gas retailers have met regularly, as both sides try to respond to the failed lawsuit retailers launched against Revenue Quebec and Canada, tax assessments, historic tax grievances and other issues.

The relationship between Kahnawake and Quebec may be tested with elections forthcoming for both governments.

The relationship, for Norton, has resulted in successes in the past such as the Peacekeeper agreement and recent labour cooperation, and he wonders why other issues cannot be resolved successfully.

“It’s kind of a hot and cold situation,” said Norton. “We’ve had some successes in certain areas, and I don’t know why we can’t use those as examples of where we’re able to do things and make them happen. Why are we hung up with these other matters?”

Norton also spoke about his trip across the Atlantic to Dublin, Ireland to discuss educational possibilities.

In Dublin, Norton was introduced to staff at the Ireland Canada University Foundation (ICUF), an educational body that supports scholarly exchange between Canada and Ireland.

“I was asked to meet with them and talk to them about the possibility of having an Indigenous program involved,” said Norton. “There’s quite a bit of interest shown towards Indigenous people in Canada (at the ICUF) because of I guess the dominance of the British in that country as well as Canada.”

Ireland has a long, complicated, and, at times, contentious history with British colonial rule that few in Kahnawake would have trouble finding commonalities with.

“There’s no hiding the fact that there’s still a lot of anger and resentment about the British involvement over there,” said Norton.

Politics aside, Norton said the visit was extremely positive and that he’s been invited to return in June to further the exchange.

He also was a guest on the nationally syndicated Pat Kenny radio talk show on newstalk 106, and visited the Canadian embassy to meet with Canadian ambassador to Ireland, Kevin Vickers, the former RCMP officer who was the sergeant at arms on parliament hill, who was hailed by many as being the one responsible for stopping assailant Michael Zehaf-Bibeau who opened fire at the capital in 2014 killing corporal Nathan Cirillo.

“He was pretty emotional about the time he spend in the RCMP in Canada, and the relationship he struck up with First Nations in the maritime region,” said Norton.

Norton was pleasantly surprised by the positive attention he received throughout his trip in Ireland.

“They welcomed me with open arms and said come forth and participate,” said Norton. “We’re setting the groundwork.”

After Dublin, Norton spoke about attending the annual ICE Totally Gaming conference in London, and the community’s continued success in the industry.

“It was a further indication that the Kahnawake Gaming Commission is at the forefront of so many different things,” said Norton. “Being a recognized, credible, jurisdiction internationally is an important thing for us.”

Staying at the top of the game is what the conference is all about, and Norton said he enjoyed pulling “booth duty” and meeting visitors from across the globe, who stopped by to chat about Kahnawake’s place in the industry.

“It was very good to show that we’re serious about who we are and what we’re doing,” said Norton. “I enjoyed my time there and had a good opportunity to talk to a variety of people that in the next little while will hopefully demonstrate some returns.”

The networking event gives participants to discuss topics beyond gaming such as tourism, politics and different exchanges with people representing special interests in their respective countries.

“It’s more than just talking to people about gaming,” said Norton. “There’s all kinds of things that come up.”