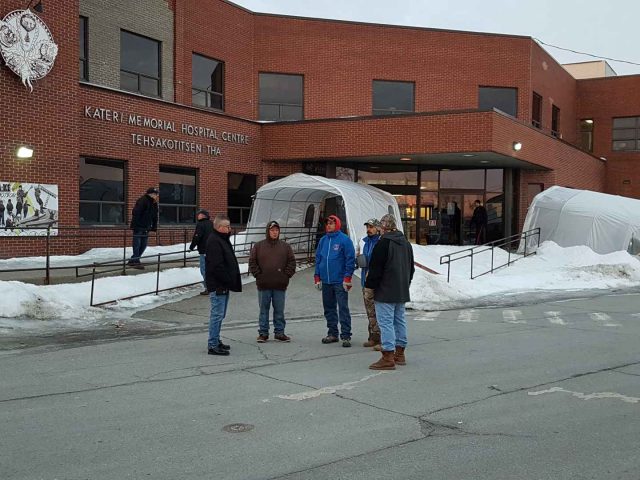 Some Kahnawake workers staged a peaceful protest outside of the KMHC early last Thursday morning over the awarding of a work contract to an outside company. (Paul Graif, The Eastern Door)

They didn’t say a word or carry a sign. They didn’t have to. Their message was loud and clear: Kahnawake projects should go to Kahnawake workers.

A group of about 25 workers staged a peaceful protest in front of the Kateri Memorial Hospital Center (KMHC) on the morning of February 22, at 5:30, which lasted for about two hours under watch of at least seven Kahnawake Peacekeepers.

The workers and contractors from Brian Goodleaf and John “Six Footer” McComber’s construction companies were upset that they weren’t even given the courtesy of a response to their tenders for the carpentry contract of the second phase of the hospital expansion project.

Goodleaf said he and the McComber never heard a word from EBC after they submitted their tenders prior to the January 15 deadline.

“Why are we being discriminated against over a job like this one?” Goodleaf said. “It’s in our town. It was our community funds that raised a lot of money to do this and our men are being overlooked as well as the fact that we have not been acknowledged or where our tender is, or where we are in the process. Nobody has contacted us.”

The protestors gathered after Ryan Montour and Goodleaf posted a message on Facebook calling protesters to form because an outside sub-contractor was hired by EBC to complete the carpentry work abandoned by Chris Montour Construction (CMC) on December 4, as reported in The Eastern Door.

EBC is the General contractor on the hospital expansion.

Goodleaf said his bid was $880,000, while McComber’s was slightly higher.

Mohawk Council of Kahnawake chief Rhonda Kirby has the file, and said a joint statement will be issued shortly from council and the hospital, but that a contract has been signed. The winning bid was significantly lower than the two local bids.

However, there is a provision in the contract that they consider Kahnawake workers first.

According to Deom, the workers from EBC have indefinitely abandoned the job site because, “they fear for their safety,” he said.

Calls to EBC Manager Peter Moudilos were not returned in time for press.

The Kahnawake Labor Office was kept in the dark about the contract being signed according to Louis Stacey, the occupational safety and construction manager.

“No, No I didn’t (know about the contract being signed). I found out late yesterday afternoon,” said Stacey.

“I encouraged the general contractor, EBC, to reach out to Kahnawake contractors to replace CMC and that’s the last I heard of what’s going on here.”

Stacey is just as nonplussed as the workers from the community that were overlooked.

“I think its’ wrong. This is one of the biggest contracts in Kahnawake right now and I think we should have more Native content employed,” he said.

Phase two of the construction project was supposed to be completed by April, but that deadline will not be attained due to labour troubles.

Susan Horne, who is the executive Director at the KMHC says she would prefer to have Kahnawake workers on the job, but she says it just may not be possible.

“I guess that’s the best case scenario,” she said. “But when there’s constraints and contracts can’t be fulfilled by local content then we have to look at other means. For me as the administrator, I have to keep my eye on the ball for what we’re there for and right now with these delays of the project, we are not going to be able to improve the services to the community in the timeframe that we had hoped.”