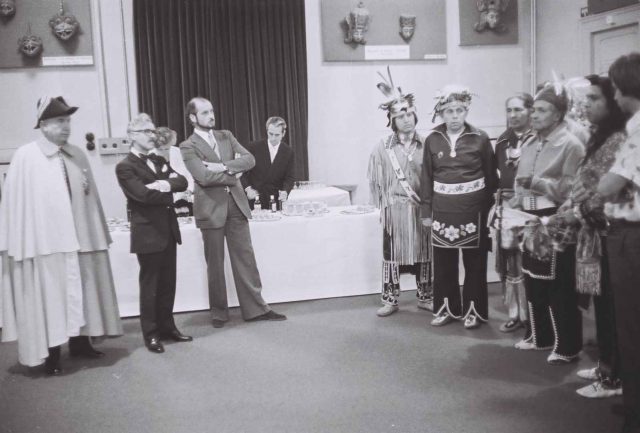 The meeting between the Haudenosaunee delegation from 1977, and the mayor of Geneva Claude Ketterer is an example of the positive relationship between the Swiss city and the confederacy. The Haudenosaunee delegation is (from left to right) Loran Thompson (Akwesasne), Leo Henry (Tuscarora), Oren Lyons (Onondaga), Tadodaho Leon Shenandoah, Bruce Elijah (Oneida), and the delegations interpreter. (Courtesy Kenneth Deer)

While Kenneth Deer was presenting last week at the Viens commission, he brought along a series of photos to accompany the story that resulted in the forming of the United Nations Declaration of the Rights of Indigenous Peoples.

The story in question starts with Deskaheh, the Cayuga chief who travelled to Geneva, Switzerland in 1923 to speak at the League of Nations (the precursor to the United Nations).

Though the photo is set in Geneva, this week’s Blast From the Past photo is not of the legendary chief, but may not have been happened without his example in the inter-war period.

“When Deskaheh was in Geneva, he was very popular,” said Deer. “He was giving talks all over the place, and one day he was giving a talk at one event, and there was a little boy tugging on his shirt. The other people started chasing the boy away saying, ‘don’t bother him,’ and Deskaheh said, ‘leave him alone. I’ll talk to him.’ So he sat down with the boy until he answered all his questions, and the boy was happy and he left.”

Fast-forward to 1977, and the Haudenosaunee trip to the Swiss city for the Non-Governmental Conference on Racial Discrimination Against Indigenous Peoples of the Western Hemisphere.

The delegation made their own passports, as Deskaheh had done half a century prior, and made the trip over the Atlantic.

“When they got to the airport, the Swiss didn’t know what to do with these people with these strange passports,” said Deer. “The mayor of Geneva (Claude Ketterer) found out that there was this delegation and he said allow them into Geneva on cognisance and the mayor would take responsibility for them.”

“He said, ‘I wanted to meet with you because when I was a little boy, Deskaheh talked to me, and he was so kind to me, I wanted to repay the kindness by letting the delegation in,’” said Deer. “It’s a wonderful story.”

Though Ketterer (who died in 1994) and his aids have stern expressions in the picture, Deer said the meeting was friendly, and that Geneva has always maintained a positive relationship with the confederacy. Another picture from the visit shows the mayor putting on a kustowa he was given.

The positive relationship is the ultimate example of a people-to-people relationship forged by an act of respect between an older person and a child.

“Deskaheh had a really good relationship as well because he was very popular in Geneva in 1923-23,” said Deer. “They used to say they had a real red Indian in their mix.”

Ketterer’s promise to always welcome the Haudenosaunee was re-affirmed in 1997 and 2013.