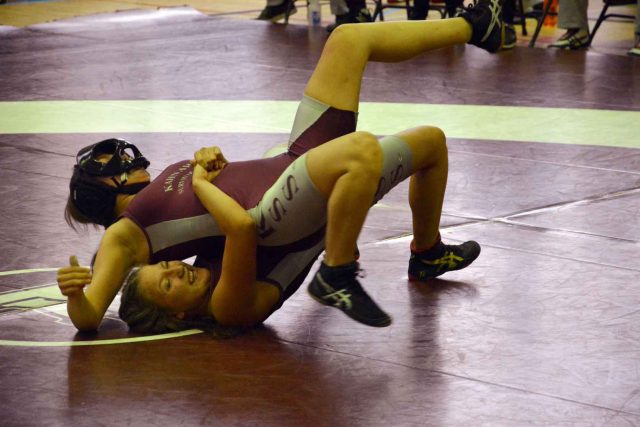 Unfortunately for Trinity Jacobs and Winter Goodleaf, the two KSS wrestlers had to face off against each other in the group stages. Trinity is wearing a protective mask after an injury during practice. (Daniel J. Rowe, The Eastern Door)

Linking arms before her championship bout against Beurling Academy’s Alica Rodriquez-Sayers at the GMAA championships on February 15, the nerves that had been building for Stella McComber vanished.

“I was really nervous when the finals started because there were so many people watching,” she said. “Once I get on the mat and the ref blows the whiles it’s just me and the girl and my nervousness disappears.”

Though she didn’t know it at the time, the match would determine the girls’ championship and McComber needed a win for Kahnawake Survival School to walk away with the banner.

McComber and Rodriquez-Sayers went back and forth, with both looking capable of taking the match, but McComber eventually got her opponent in a headlock and then the pin.

“It felt great, but if it wasn’t for the girls’ great performance, we wouldn’t have gotten that banner,” said McComber.

The Survival girls went into the day with a five-point deficit to Beurling, and needed to put on a strong showing in the championship round to hold off the Verdun school.

After Yakotahusatat McComber was injured in the first bout, Survival put on a showcase. Sara White, Jordyn Goodleaf, and Teiotsatonteh Diabo all won, leaving McComber with a chance to push the advantage, which she did.

Diabo spoke about battling nerves leading up to her match against Meagan Riley from Beurling.

“I’ve been doing this for three years, and the past two I’ve won,” said Diabo. “I never wrestled a lanky girl. This was very nerve-racking. I thought I was going to cry before I went on. My coach reminded me what to do and how to do it, and he kept calming me down. When I went out there, I just remembered everything they told me to do.”

In the end, KSS edged Beurling by two points and took home the girls’ fifth banner in half a dozen years.

Assistant coach Angel Robertson was impressed and unsurprised the KSS’s girls could pull off the win.

“Honestly, this group of girls have been training so hard, I’m glad they won,” said Robertson. “They truly deserve it. This year was a big learning process. We had to take each tournament at a time. These girls earned that win, and I couldn’t be more proud of them.”

For every victory, there was a match that went against KSS.

Watching wrestlers leave their match in tears was emotional, to say the blaringly obvious.

“It makes you want to cry because you’re with them five days a week for two hours every day, so you have a good bond with them,” said Diabo. “When you see them cry, you want to cry.”

The boys’ team had just three wrestlers in the championship Thursday as the young team works through a transitional year.

The final bout of the day featured two of those wrestlers, with brothers Chase and Dean Brascoup facing off while their mother Angie sat on the sidelines.

“Dave is a really good guy, so I went out there and wrestled for him,” said Dean.

“Everyone did really good,” said Dean. “I’m proud of everyone.”

As for wrestling his older brother, Dean would have rather faced a different opponent.

“I didn’t want to have to wrestle my brother in the finals, but it was good,” said Dean.