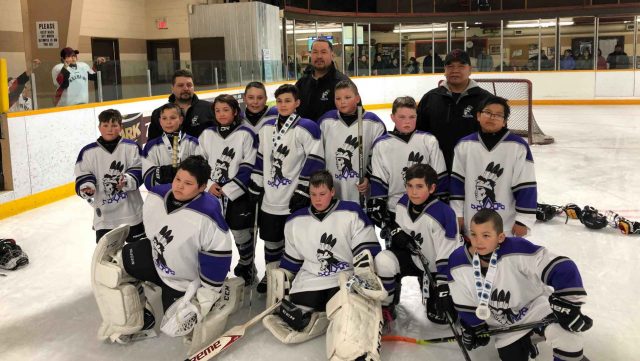 The Atom Mohawks with a couple of pickups played great all the way to the end at the Mushkegowuk Cup in Ontario coming home silver medalists last weekend. (Courtesy Bobby Patton)

A team of Atom Mohawks hockey players and a couple of Novice stars came back Sunday and Monday from Timmins, Ontario after taking part in the 10th annual Mushkegowuk Cup, an all-Native hockey tournament hosted by the Mushkegowuk Council, the body that represents the Cree communities on the Ontario side of James Bay.

Bobby Patton went with his grandson and another player to the tournament last year and joined a team from the region, and this year, Patton helped organize an Atom team to attend. Ten of Kahnawake’s Atom players joined a Cree goalie from Moose Factory and an Oji-Cree player from London, Ontario to make up the Kahnawake Mohawks team.

Patton said the skill level ranged from top to bottom, but with a common denominator throughout the rosters.

“Being in a Native tournament, there are no type of divisions,” he said. “Everybody’s equal and they all played against each other.”

Hunter Lahache coached the team that started by beating the Attawapiskat Ice Dogs 10-4, and continued hot all the way to the finals of the Atom Recreational division.

In the final game Sunday, with 34 seconds left in overtime against the Moose Cree Scrappers, a puck found its way into the back of the Mohawks net to hand Kahnawake a silver medal.

The positive overall result will be a huge boost for the young team that now has back-to-back silver medal finishes in tournaments.

“This is the first time a Mohawk team has ever participated in this type of a hockey tournament this far out,” said Patton. “We set the bar pretty high. The first time coming up here representing the Mohawk nation from Kahnawake, and coming up here and we go to the finals and come out a silver medallist in overtime. We did make a statement.”

Patton’s grandson defenseman Wyatt Cross scored four goals and spoke about playing in the tournament where the competition was dialled down a touch.

“At home some people say bad words and stuff, but here we were all laughing and telling jokes to each other,” said Cross, who added his favourite thing about the tournament was making friends.

Patton said parents are already talking about taking the team to a tournament in the Abitibiwinni Algonquian community of Pikogan, Quebec.

“It’s amazing how these kids all came together and how well we did in six weeks putting the team together and going right to the finals, and coming out medalists,” said Patton.

In addition to the Atom team, a pair of Novice players laced up from Kahnawake.

Ie’nahkwenhá:wi Rice was invited to play with the Moose Cree Oilers, and won the MVP for the team’s one win.

“It was awesome,” said Clifford Rice, Ie’nahkwenhá:wi’s father. “It’s a long drive, but it was worth it. It’s all for the kids, and they had fun… My daughter loved it.”

“It was fun, and I met new friends,” said the seven-year-old Nolan of the experience.

Nolan’s older brother Joren played for the Atom team, and his mother Ashley Jacobs spoke about the difference between going to tournaments in the Montreal region versus the all-Native tournament.

“They are friendly, but this was totally different,” said Jacobs, who made friends with other mothers at the tournament, who helped the Kahnawake crew find their way around, charge phones and get to know the community.

“You didn’t have to worry about your kids of where they were going or what they were doing because it was all just kids running around and playing,” Jacobs added. “I found it was more open and friendly of any other tournament I’ve ever gone to.”