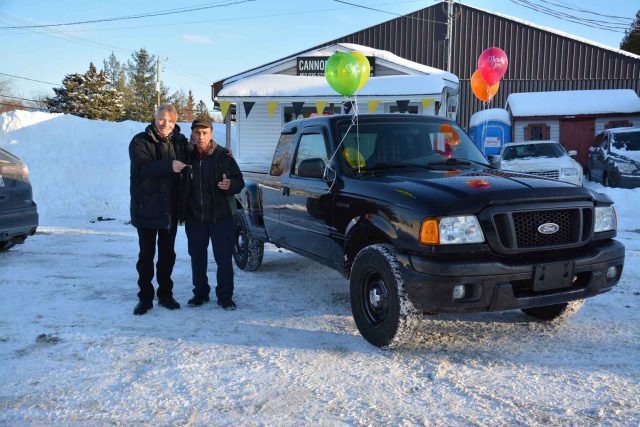 A local elder has new wheels thanks to a generous donation from several community members.

Joe McGregor was given the keys to a 2004 Ford Ranger last Friday in the parking lot of Cannon’s Auto Sales.

“I’m speechless, to be honest, and it’s very seldom that I’m speechless, I have a big mouth. I’m very honoured. Kevin’s got a heart of gold. He always likes to help people,” McGregor told The Eastern Door.

Kevin Ka’nahsohon Deer donated the truck by purchasing the vehicle from a friend in Wahta earlier this month.

“While I was there, LouAnn, who owns the truck, said ‘Kevin, do you want to buy my truck? I said ‘I have no use for a truck.’ Then we start doing ceremony for mid-winter, Joe came there one day, I noticed his tie rod ends were broken,” said Deer.

“I asked her what she wanted for it, and I said I’m going to buy the truck and am going to donate it Joe.”

McGregor and Leo Diabo co-host K103 Radio’s all- Kanien’kéha talk show every Wednesday afternoon. He’s also a faith keeper at the Mohawk Trail longhouse during ceremonies, and spends a lot of time volunteering.

“He’s always doing community work, all the work he does at the longhouse, and radio station. I know that Joe is well-liked in the community,” said Deer.

Deer returned to Wahta last week to purchase the vehicle and equipped it with brand new snow tires, rims, wiper blades, and a wheel alignment.

While he was there, he posted a photo of the truck with his intentions to Facebook, and was soon after flooded with dozens of community wanting to contribute money to offset the $2,900 cost of purchasing, maintenance, and gas to drive it to Kahnawake.

“I feel it is important to help and contribute because Joe is one of the most kindest, supportive and giving persons that I ever met. He is willing to help anyone when asked. He never criticizes or puts anyone down,” said Lou Ann Stacey.

“And loves everybody. He has done so much in the community and for the community. It is nice that people in our community support him for once.”

McGregor said the response from the community made him teary-eyed after his daughter read him the dozens of comments on Facebook.

“When you feel so good that you want to cry, and that’s what happened to me. (My truck), it’s showing some age, and I’m going to keep it as a side one. This one will be the one we can rely on. I’m very grateful,” he said.

Donations can be made by Ironhorse Wearhouse or by e-transfer to kanah47@hotmail.com.

Deer said if donations total more than $2,900, the left over will be given to McGregor and his wife Emilia.