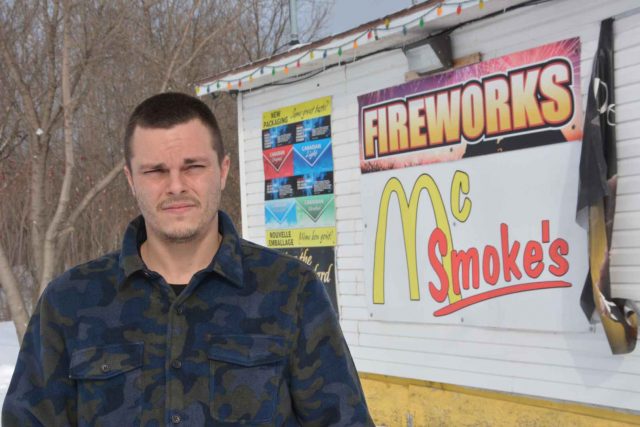 Kyle McComber had enough of cops from out of town driving unmarked cars up Route 207, and decided to confront one of them; an action PKs do not recommend. (Daniel J. Rowe, The Eastern Door)

On January 31, around 2 p.m., McSmoke’s proprietor Kyle McComber noticed something off while customers were loading product into their car at a neighbouring store on Route 207.

“I saw this car pull up and slow down next to them and pull up next to me, and he’s looking and watching the car load up,” said McComber. “He pulled out his phone and I don’t know if he snapped a picture or was calling somebody, but I went out and tried to speak to him and he took off.”

The car looped back, and returned to the smoke shop.

“Out of curiosity, I wanted to follow him and see what the situation was, if he’s actually a police officer or if I’m crazy,” said McComber.

McComber followed the car, and eventually boxed the vehicle in at a parking lot down the road.

“He got out of his car, I guess he felt threatened, and I right away accused him of being a police officer,” said McComber. “I said I watched you doing surveillance on the store next to me, and he said, ‘I’m St. Jean sur Richelieu Police. We’re here looking for stolen vehicles.’”

McComber called the Kahnawake Peacekeepers on speakerphone, so dispatch could hear the entire conversation.

PKs responded, and promptly intercepted the vehicle in front of McSmoke’s.

Chief PK Dwayne Zacharie was unimpressed with McComber’s tact in dealing with the unknown car, and clear when The Eastern Door asked what he thought of the situation.

“People are not allowed to do vehicle stops,” he said. “There’s so much danger involved. Not just with officers, with anybody… Why would anybody stop for you and if they don’t stop how far are you willing to go?”

The reason for this is clear.

“Think about it, if this guy wasn’t a police officer and he happens to be armed, and you intervene and he gets scared,” said Zacharie. “What do you think is going to happen? Last I checked I don’t know anyone who’s bulletproof.”

Zacharie confirmed that the PKs who responded opened a file, and his officers dealt with the situation.

“Our guys were there. They dealt with the officer, and they removed him from the territory,” said Zacharie.

Officers coming onto the territory from other jurisdictions are required to notify the PKs, which this officer did not, and Zacharie said the officer in question said the PK chief was aware he was there, which was false.

“I happened to be listening to the radio and I went on the radio and said, ‘nobody informed me. He’s not supposed to be here,’” said Zacharie. “I said ‘get his information, find out who his supervisors are, tell him to leave the territory and I will deal with his supervisors,’ which I did do.”

McComber has run McSmoke’s for over a decade, and has grown frustrated with outside police agencies watching businesses (primarily tobacco) on the territory, affecting sales.

“Over the past probably six months business has been in a steady decline, so I’ve been watching more than usual,” said McComber, who drives the 207 to and from his home in the McGregor Farm area and his smoke shop, and said he notices vehicles watching stores often.

Zacharie clarified the protocol when it comes to other policing bodies entering Kahnawake.

“We only have a protocol with the RCMP and the Surete du Quebec. We do not have a protocol with St. Jean sur Richelieu or Montreal Police or anyone else. We’ve tried to develop protocols, but people balk at that because to them it feels like they’re being stopped from doing their job,” he said.

Protocol or not, Zacharie said any officer should know to contact the PKs when coming on the territory.

“Absolutely they should, but they don’t,” said Zacharie. “Whatever story he gave, we don’t believe that for a second, but we have to put it in the report because that’s the story he gave.”

McComber’s actions, however, were reckless according to Zacharie, and could have resulted in an injury or worse.

“They should notify the Peacekeepers immediately because you don’t know who it is,” said Zacharie. “It could be somebody who’s armed waiting to rip off a store, the people, you don’t know.”

Zacharie added that the government gives Kahnawake a lot of leeway to operate its tobacco industry on territory, but acknowledged that detachments tasked with monitoring the industry will come on territory to prove the source of the transaction for their files.

“They need to know who and what they’re dealing with,” said Zacharie. “They don’t care what happens in Kahnawake. They care what happens outside Kahnawake, and they can’t prove that something’s happening that it’s coming from Kahnawake. Let’s say it’s on the Mercier Bridge. They have to prove that it’s coming from Kahnawake because in their files they have to do that.”

“I see these undercover cars every single day,” said McComber. “It got to the point last time where there were planes flying over 12-1 a.m. in the morning.”

McComber is a pilot and tracked the flight patterns on his phone that he showed to The Eastern Door, which show planes flying in loops over the area multiple times.

McComber understands the PKs safety concern, but is also concerned with protecting the local industry.

“I do know that families are losing income because of this,” said McComber. “This is something that is legal for us for years and years, but for them to be conducting their operations here is starting to hurt families here.”

The bottom line for Zacharie is safety.

“I would really hate for someone to get hurt, anyone at all,” said Zacharie. “You have to understand where something like this could go, and if someone pushes it, it could definitely go to that level and then what’s going to happen?”