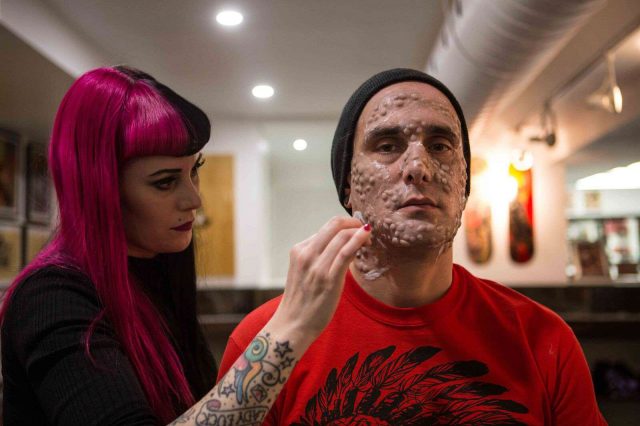 With playoffs set to start Monday, basketball teams across the GMAA are gearing up for a final boost of momentum before the elimination rounds.

Survival School’s Midget girls team proved it could scrap it out for a win last Thursday against St. George’s School, and looks to stay atop the standings and seal a bye for the first round of the playoffs.

St. George’s was the other one-loss team on the Division 3 Midget tables, and came at Survival with aggression and skill on KSS’s home court. With a basket plus free throw at the end of the third, the Knights were within two points of Survival and had the momentum.

Goodleaf split the St. George’s defence for an underhand layup for the first fourth quarter bucket, and then Hemlock nailed a two-pointer just inside the three-point arc to push the lead to six. Hemlock had the hot hand all game and swished a three-pointer earlier in the game.

Try as they might, the St. George’s girls could not claw back against Survival, despite having a lopsided advantage in foul calls 32-14, and Konwashennón:ni Beauvais and Teiotsatonteh Diabo fouled out of the game.

Survival played last night after printing in a crucial game against winless Westwood High School. A win would mean Survival goes straight to the semi-finals of the playoffs.

Diabo and the rest of the team knows that if KSS is to take a banner home in the first year the team has played b-ball, the girls need to stay out of foul trouble, and particularly avoid taking meaningless fouls away from the ball; as coach Christian Gaudette kept yelling Thursday.

“Goodness, we are gonna need to keep a clear head for the whole game,” said Diabo. “Also, we are going to have to extremely watch our reaching in, and pushing. Hopefully, no one will get fouled out. I know I’m trying not to.”

The three Kuper Academy Kodiak girls’ teams with dreams of banners were all back in action this week after a break for exams.

The Kodiak Bantams got a rude awakening Tuesday when hosting Bialik. Kuper played without starters Bonnie Zachary, Kaksa’tahno:ron Deer, and several other key players, and got smoked 50-9 for the girls’ first loss in regulation (Kuper lost in a forfeit once for not having enough players).

Guard Jillian Diabo’s mother Shelley Jacobs was in the stands watching in shock.

“One girl, everything she shot went in,” said Jacobs. “They were not used to playing a team with good skills. They usually come back, but nothing was going in.”

The Bantam girls’ week does not get any easier, as the girls play the undefeated FACE today looking to get back to winning ways.

Kuper is 7-2 on the season and remains atop the division, but need a win tonight to keep pace with Bialik and FACE.

The undefeated Juvenile Kodiaks, coached by Angie Marquis, played at Marymount last night and have a tasty matchup tonight against JFK High School, a team that also has yet to lose this season.

Tonight’s game will decide who takes the top spot in the division.