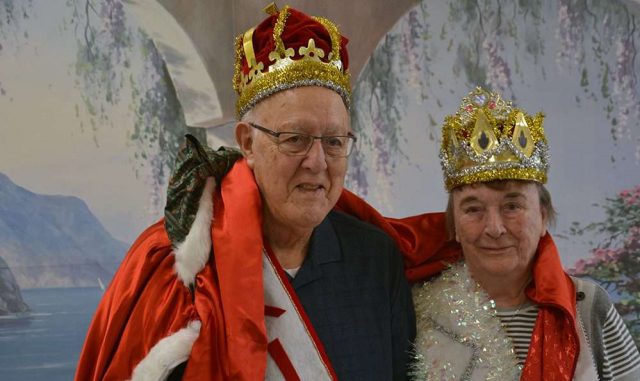 Billy and Janet Stacey have a word of advice for those couples wanting to make things last. They should know, it’s been six decades together. (Daniel J. Rowe, The Eastern Door)

They’ve been together ever since.

Fast forward to yesterday (Thursday) when Billy and Janet Stacey were named king and queen at the annual Elder’s Luncheon as part of the Winter Carnival.

The charming couple sat down with The Eastern Door and talked about how they met, wound up together, and stuck through it thick and thin for over six decades.

“We were younger, we were playing games and he always used to squeal on me and tell everybody where I was hiding, and I told my mother. She said, ‘don’t worry about it. He just likes you.’”

When Billy’s sisters would come over to visit, they would bring Billy along.

“The minute he walked in, I left,” said Janet, the daughter of Jimmy and Sadie Wilson.

Billy, son of Frank Stacey and Florence Murray, stuck it out, however, and married Janet when he was 23 and she was 20.

“Once I found out that she was coming my way, and I talked to her father and the mother said, ‘take her! We don’t want her. If you think you’re going to have problems with her, you’re not coming here. He can come, not you,’” said Billy, as Janet nodded and laughed along.

The couple’s sense of humour has clearly helped each other enjoy the journey, and each gave a word of advice for young couples wanting to make things work.

“Just accept your partner and be kind to each other,” said Billy. “Don’t forget to smile and stay with each other.”

“Patience,” said Janet. “Let each other have their space. It’s just give and take. Don’t hold grudges.”