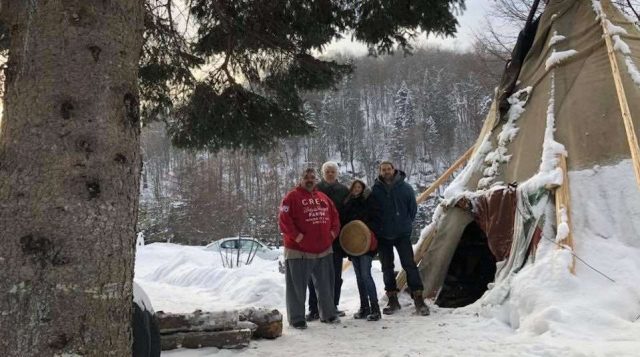 About 40 kilometres southwest of Tioweró:ton, a self-identified Iroquois community has been ruffling feathers in the small Quebec town of Saint-Adolphe-d’Howard.

From November 10 until the end of January, the group who call themselves the Communauté Hochelaga de l’Iroquoisie, had a fire burning in opposition of Hydro Quebec’s 120-kV Grand-Brûlé’Saint-Sauveur Supply Line project.

“I think they saw a particular issue and they saw an opportunity to assert themselves, and I’m not buying it. I’m not jumping on that bandwagon,” said Mohawk Council of Kanesatake grand chief Serge Otsi Simon.

“If there is a Hydro project that’s going to affect our Aboriginal treaty rights or anything of that nature, we’re going to have to take it up upon ourselves, but we don’t need the guys like the Iroquois of the Hochelaga or whatever the hell that is.”

The group’s leader Daniel “Black Feather” Larmand said they had to close down their protest camp after running out of money.

They reached out to Simon for support last year, with less than expected results.

“I kicked him out of here. These are basically non-Natives and these guys went and installed themselves there,” said Simon.

The Hochelaga de l’Iroquoisie is a part of a larger association of 12 other self-identified Metis communities across Quebec that branched off from the Native Alliance of Quebec in the early 2000s.

“Our communities, our offices are all in our house. We don’t have any financial support. We cannot advance, we cannot go forward, we cannot help our young ones, we’re stuck and to be part of my brotherhood and sisters, fathers, and grandmothers – it seems like it’s all complicated because we don’t live on the reserve,” said Larmand.

Larmand himself said he doesn’t identify as Metis, but rather as a non-status Kanien’kehá:ka with linage from his maternal grandmother.

“I represent Metis, but I’ve got five generations of Native in me, and I got all my proof and everything, but I didn’t go apply for a card,” he said.

“Why do we have to prove who we are? I’m original, I come from this land. This is my home, I’ve been fighting to protect this land.”

“We want them to know who they were, where they come from, and what’s their traditions whether they’re Mohawks, Algonquin, Huron, whatever – we try to get people that are inside that circle to teach our people and that’s the nice thing about our community. I just don’t understand why we have so many problems to work together, it’s all about money,” he said.

Darryl Leroux is an associate professor at Saint Mary’s University in Halifax. His latest research focuses on ‘Eastern Metis’ and white settler self-idenigenization.

He said the group is part of a larger phenomenon that is sweeping across the country post-Daniels, which declared that Métis and non-Status Indians are “Indians” for the purpose of federal Parliament’s law-making jurisdiction under subsection 91(24) of the Constitution Act.

Many groups, such as the Mikinaks in Beauharnois, have been popping up all over Canada, especially in French-speaking areas, attempting to exercise Aboriginal rights based on their ancestry.

“I think it all stems down to what types of political claims are they making, and making for Indigenous people? This group happens to be at the moment taking a position that they think the majority of people in Kahnawake or Kanesatake would support, but I have lots of examples where those groups are doing exactly the opposite. Literally opposing, actively, Indigenous people,” said Leroux.

“Saying that they’re Kanien’kehá:ka – whether it’s for good purposes or not. Once they’re embolden to do that, they’ll just continue to do that.”

This isn’t the first time Larmand and his group has drawn criticism in and around Montreal.

“These guys are worse than the Mikinaks, these guys are claiming to be Iroquois. I’m so sick of fighting with them now,” said Kanien’kehá:ka elder Sedalia Fazio.

Fazio was upset last week when she was shown a photograph of her from over a decade ago that has been used on the group’s website.

“I was pissed,” said Fazio. “I had no idea they were taking my picture. I want nothing to do with these people.”

The photo was taken in 2006 at Place Emelie Gamelin at the First Peoples Festival. Fazio remembers Larmand causing controversy at the festival that year, and was asked to leave.

“This guy was telling everybody that he was the chief of Montreal, the chief of Hochelaga, and I went and asked him to leave,” said Fazio.

André Dudemaine, the director of the festival, said he was equally upset.

“The ‘wild bunch’ took photographs of themselves in a public space where Terres en Vues was having outdoor activities with free access. Terres en Vues has nothing to do with those people,” said Dudemaine.

“Obviously, we are not comfortable with the fact somebody used our festival as a backdrop for a political agenda we never backed. They never asked us our authorization. No wonder why.”

When asked about the photos and other criticism toward the group, Larmand said he wished Fazio would have contacted him directly.

“The number is right there on the Internet. Why don’t she call me?” he said.

“If one day I was able to speak to all these chiefs, and have them in front of me, let them listen to me 10 minutes, if these people would understand that we are all brothers and sisters. We have lineage with our ancestors; we have proof of it, so why do we have to be called outsiders? Why do we have to be rejected from the communities?”