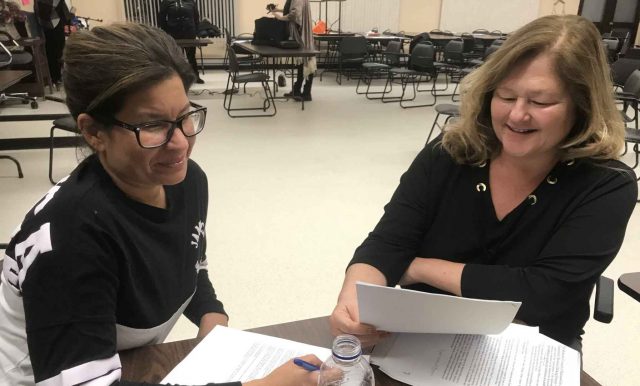 Trina C. Diabo and Alana Goodleaf-Rice hope to have the MCK Elections Law in place before the nomination period begins for the elections this year. (Daniel J. Rowe, The Eastern Door)

Around 20 people braved the cold and showed up at the Golden Age Club Tuesday night to discuss and debate potential amendments to the Mohawk Council of Kahnawake Election Law.

The topic may sound dry as an Arizona desert, but the debate brought some rain, and, at the end of the just over two-and-a-half hours, there was vegetation sprouting from the precipitation.

“I always just hope community members attend hearings, so I was happy we had good participation and good dialogue,” said Office of the Council of Chiefs’ technician Trina C. Diabo, who led portions of the hearing.

A point of contention: should a separate and autonomous justice commission appoint the electoral officer, or should it be elected?

Some in the room felt uncomfortable with the post being appointed (as amended in the new draft), but agreed that the person who runs the election should meet some criteria such as management experience.

A compromise was struck that criteria be developed for the post, and the approved candidates vetted by the Justice Commission be put forward for election.

The amended law now also includes a preamble with jurisdictional statements, which was not in the old law, and includes a fixed election date on the first Saturday of July.

The 2015 elections were held in June, which caused confusion for many, as MCK executive director Alana Goodleaf-Rice explained.

The room decided a permanent date was better.

The law will also include a requirement for potential council chiefs to declare all their private business interests, and the purpose for this rule.

Council chief or grand chief candidates “must declare all their private business holdings the purpose of which is to verify conflicts of interest if elected and/or respond to public inquiry of chiefs,” Section 12.1 (g) of the law reads.

A member suggested council chiefs be barred from certain business activities after they leave office, but director of justice services Kevin Fleischer explained that that was not within the scope of the election law.

In addition, if a candidate has their membership suspended they will not be eligible to vote or run for election. Diabo explained that this has never been an issue in the past, but felt it should be added to the law should the situation arise in the future.

The law will also establish a body to review electoral officer decisions quickly and efficiently.

“Right now, if there’s any appeal it goes to the court of Kahnawake and sometimes court proceedings take a little bit of time,” said Fleischer. “The idea was to have some decision-making body that would handle appeals before election day, and quickly and promptly make a decision and move on because there’s some stuff you don’t want people appealing after an election. They should be handling it before election day in a quick, expeditious matter.”

A section of regulations, including the nomination, verification, poll preparation, vote counting and other procedures, were separated from the law and put in a different process.

The idea is that, if changes need to be made, they can be altered without having to amend the entire law through the Community Decision-Making Process.

The amendments must be put in place by March, so they would go into effect before this year’s election cycles.

The technical drafting team will now work on implementing the changes and introduce them at the next meeting. The date and time will be released shortly.

“I’m confident that the drafting team will meet and get the work done quickly and efficiently,” said Diabo.

“The community provided some examples of criteria they wish to see for electoral officers, so that will be the guide. Then the TDC (technical drafting committee) will need to tweak a few areas and get clarification to a few questions that came from community members.”