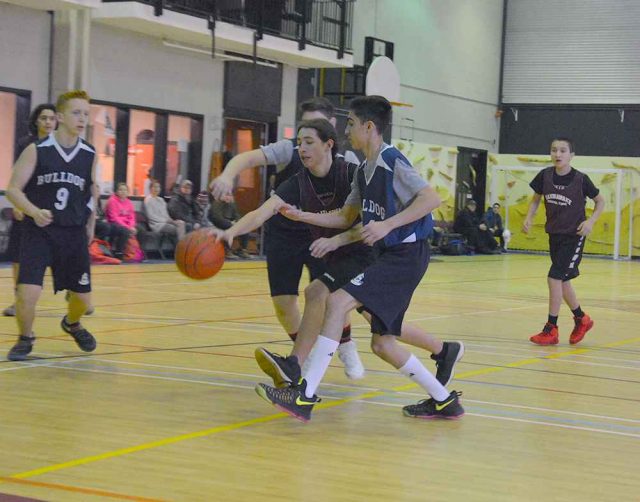 Try and try again was the motto for this year’s boys basketball team at Survival School that never gave up and won their first game this week, after a trying first season. (Photos by Daniel J. Rowe, The Eastern Door)

If at first you don’t succeed, try and try again.

Then try some more, and make a few baskets while you’re at it.

The Kahnawake Survival School Midget boys’ basketball team had a bit of a trying first season. Though never lacking in determination and athleticism, the boys in burgundy failed to win a game all season and headed into their final week of regular season action Tuesday.

Survival travelled to the NDG Sports Centre to take on Kells Academy, and dang if the boys didn’t come back with a 42-32 win. Kaymen Diabo was on fire from distance going 3-3 behind the three-point arc.

“It felt really good,” said guard Rahentéhtha Delormier after getting the school’s first W in recent memory. “Our first win of the whole year.”

While Survival’s girls’ team was a revelation this season, losing just once in seven tries, the boys were never so lucky.

Survival had a few times this year when a win seemed within grasp, but the boys could not close the games.

Even in lop-sided losses like the 72-22 one against Westwood High School last Friday, the boys did not lose their positive attitude. Heads never hung, and effort remained high throughout.

Perhaps the energy comes from the fact that most of the boys on the team are multi-sport athletes used to slugging it out on various fields of battle.

“Not really, it was pretty easy,” said Delormier. “I’m used to that stuff because I play lacrosse and know how to keep up the effort.”

Delormier spoke about the similarities to playing the two sports. Unfortunately for Delormier and the boys, Survival lost its final game to Macdonald High School 43-12 Wednesday.

Regardless of the team’s overall record, he was happy to have played on the basketball team, and introduce the school to the hard court.

“It felt pretty good,” he said. “It’s something new to do. It’s better than not doing anything after school.”

Survival’s girls took on the undefeated St. George’s School last night after printing, and the rest of the GMAA including Kuper Academy’s talented trio of female teams have a handful of games remaining.