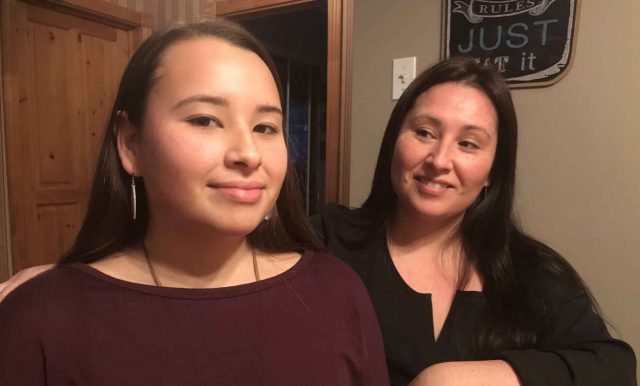 Tekahnekake Stacey and her mother Marty Stacey-Phillips had a year that tested their will to the extreme, but are all smiles after a successful surgery removed a tumour from the 16-year-old Survival School student’s brain. (Daniel J. Rowe, The Eastern Door)

Last week, grade 10 Kahnawake Survival School Tekahnekake Stacey had a check up. While check ups are nothing special for most teenagers, this week’s was to follow up on how the young woman was holding up after brain surgery just over a month ago that ended years of discomfort and outright pain.

Tekahnekake, who turned 16 this week, noticed around two years ago that something was wrong with her health.

“My menstrual cycle was off, it’s been two years that it’s been completely gone,” said the 15-year-old last week. “Weight gain, my vision was off, I was getting headaches.”

“It started with her eyes,” said her mother Marty Stacey-Phillips. “She’d complain that when she was reading, her eyes would jiggle.”

Multiple trips to the optometrist came back with diagnoses of astigmatism and a prescription for corrective lenses. Within months, the situation was worse, and the cycle would repeat itself.

“We went back and again they gave her another prescription, they just kept increasing it, but really it was the tumour pressing on the optic nerves,” said Marty.

Tekahnekake eventually made an appointment with a school nurse, who gave her a blood test because she knew something was wrong, and needed to find out what it was. She kept some of her symptoms to herself, not wanting to further trouble her family.

“I didn’t want to think that anything was wrong,” she said. “I was always scared of going to hospitals and stuff. I figured maybe it was just puberty.”

Looking back, Marty is shocked she did not notice sooner that something was seriously wrong.

“I can’t even wrap my head around how I didn’t notice for that long because I would just buy and buy her feminine products in bulk,” said Marty.

The headaches, vision problems, menstrual issues and other symptoms persisted, and Tekahnekake eventually made an appointment with a doctor after seeing the nurse.

After an MRI in the spring, the daughter and mother got the shocking results.

“We found out on a Wednesday that it was a tumour,” said Tekahnekake.

The tumour was on the pituitary gland, known as the master gland of the body that produces many hormones that travel throughout the body.

“I just broke down,” said Tekahnekake. “I didn’t know what to do. I cried but I was just like, ‘holy crap. This is reality.’ I never would have thought that would have happened to me.”

“It was awful,” said Marty. “It was really awful. I was beat up. I grieved for maybe over a month. I cried every day, all the time. I didn’t know what to do.”

Doctors immediately asked if anyone in the family had the same issue, which, Marty found out from a great aunt, was the case.

“There are other people that did have it, but she’s the youngest case,” said Marty.

Marty did everything she could for her daughter, including speaking to traditional healers in the community to find ways to stay positive.

“I did so much research to do what I had to do to get my daughter better,” said Marty.

Marty kept on the endocrinologist, insisting that the side effects were too severe, and that they needed something else. After filing reports with the government showing how Tekahnekake was not responding to the treatment, doctors prescribed Dostinex (cabergoline), which also did not help.

“We thought it was better because the first day was calm, it wasn’t too crazy, it was bearable, but then the same thing as the other pills,” said Tekahnekake.

She had no choice but to stay on the Dostinex, but Marty would not relent in insisting something be done to remove the tumour.

“Every appointment we went to, my mother would bring up surgery constantly, trying to get them to talk to the surgeons for me,” said Tekahnekake. “Finally, they agreed that we could meet with the surgeons.”

Marty was insistent because she could see what the tumour was doing to her daughter.

“I pleaded with them, ‘can you just remove it,’” said Marty. “She’s 15 years old. Look at her. This is taking everything from her. It takes all her energy to get up and go to school in the morning. It takes everything out of her. The medication is just horrible.”

Through it all, Tekahnekake’s cousin Stella McComber was a constant presence, always trying cheer her fellow wrestler up, while the two finished grade nine.

“Seeing Tekahnekake go through this whole experience was unreal,” said McComber. “It was very emotional and nerve-wracking, but when we would hang out, we would have a great time and share a bunch of laughs.”

Marty is eternally grateful for McComber.

“She’d sleep with her,” said Marty. “Instead of staying in the room or saying, ‘okay. I’ll go home,’ she’d stay here with her and sleep with her on the couch up here. She stuck by her.”

Eventually, doctors decided to go in and cut the tumour out. They would enter the nasal cavity, and remove the growth December 11.

Tekahnekake was nervous, but confident it was the right thing to do.

“It was scary,” she said. “It was my first surgery and it was a pretty serious one going into my brain. I was scared, but deep down I knew everything was going to be alright because of all the support I had.”

Waiting while her daughter was under the knife was intense for Marty.

Marty repeated several times how grateful she was for the doctors caring for her daughter.

“The surgeons were awesome,” said Marty. “They called every few hours to tell us an update, how everything was going, what they did.”

Tekahnekake also knew that her classmates were burning tobacco for her on the day.

“All of that good medicine and good minds really helped me stay strong and confident that I was going to make it through the surgery and come out tumour free,” she said.

Tumour out, and coming back to consciousness, Tekahnekake, unfortunately, was not done with her ordeal.

Six percent of those who undergo invasive surgery through the nasal cavity experience the same thing, and doctors did a fat graft from her leg, and plugged the leak.

Tekahnekake continues to recover from the surgery, and still feels the side effects while the drugs work their way through her system.

“To be tumour free is the best feeling in the world for me,” she said. “I felt such release from everything, from daily struggles, from when I’d get mad or sad or frustrated. I had days where I’d break down and cry because I felt that this tumour and the medications took everything I enjoyed doing away from me.”

Her follow up last week with her surgeons went well, and she will need to go back for an MRI in the near future to make sure they got everything.

She cannot wrestle, and now has a small bald spot near her temple from where the vice held her head during surgery.

Though the process from diagnosis to surgery lasted less than a year, it feels much longer.

“I guess it’s not that long, but it felt really long,” said Tekahnekake. “Especially the summer. It was so depressing. From the side effects, and how I felt from having a tumour, I just put myself away in a bubble away from everybody because I was constantly getting sick.”

“She was so strong throughout it all, and brave,” said Marty.

“I gave up a lot,” said Tekahnekake. “It killed me that I couldn’t go, but I was thought of. The morning they left, one of my teammates’ parent dropped off my bag for NAIG with my tracksuit in it. My cousin collected pins for me, and one of the head people of Indigenous Games gifted me a sweater with the help of my friends. It made me feel really loved and like I was still part of the trip.”

There is a chance that the tumour could return, a situation the family would address again with the same vehemence.

“If it grows back, I’m willing to do it again,” said Marty.

Tekahnekake said her mother was a constant source of strength.

“With me at every appointment, she kept me strong and kept me fighting every day,” she said. “With her, I knew everything was going to be alright.”

The hole in the nasal cavity they cut needs to heal, but Tekahnekake is just happy her symptoms have pretty much subsided.

“I can be myself again,” she said. “With the tumour, I was very distant from everybody. I would get anxiety around people. Now I can go back to yelling in the hallways with Stella, laughing, being me. Once I’m fully recovered I can go back to wrestling, do what I want.”

For Stella, she is just happy to have her cousin back.

“I didn’t realize how much my support helped her,” she said. “I just wanted to show her how much she meant to me by being by her side every step of the way to recovery.”