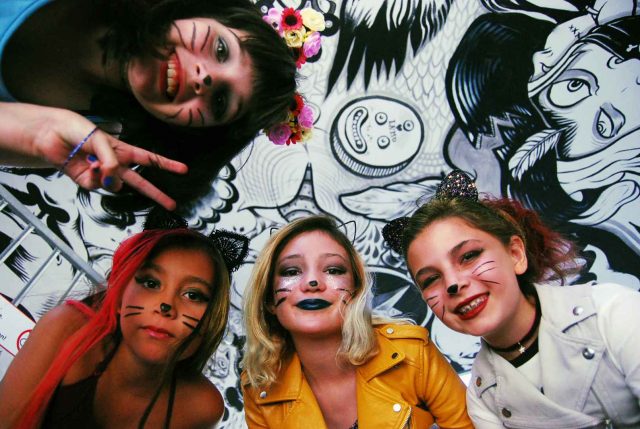 Want to be a rock star?

Native Montreal and Rock Camp For Girls is partnering to host a series of workshops starting at the beginning of February aimed teaching Indigenous girls how to make music in the name of empowerment and community-building.

“A program like Girls Rock Camp I think is really important to find that voice. I just saw how much of a difference it made, especially taking young girls and gender-non-conforming youth in giving them a way to express themselves, and it’s empowering.”

The four workshops will take place every second Saturday starting on February 3 and will be open to Indigenous girls or gender-non-conforming youth, 10 years and up.

“We’re definitely hoping to engage the communities of Kahnawake and Kanesatake,” said Robinson.

“We decided to make it intergenerational. We didn’t want to limit it just to the young women and gender-non-conforming youth, we also want their caretakers, be it their mom, their aunt, or even a foster mom.”

The workshops will take place at Native Montreal’s office. Participants will learn how to play a number of rock and traditional Onkwehón:we instruments with the goal to write a song together through storytelling.

“It’s all in the goal to even out the playing field and give a voice to women performers. In the beginning it was exclusively to women and girl performers, but then over the years we realized that girls and women weren’t the only marginalized people when it comes to the music scene, so we opened up to gender-non-conforming folks in order to include as many oppressed and excluded people,” said Taharima Habib, the project supervisor at Rock Camps For Girls Montreal.

The non-profit organization started in Montreal in 2009. Habib said in the past year, there’s been a big push to collaborate with more communities and organizations like Native Montreal.

“Initially, we wanted to have Indigenous kids come to our camp, free of cost. But, unfortunately that didn’t happen. So, I thought about how can we not only increase our visibility, but also give back to the community so that we can build some base of trust, so I came up with this program to couple storytelling, experience sharing that’s intergenerational in the community through music therapy as a tool for healing; but also a tool to encourage free dialogue and exchange of skills and advice.”

For more information or to register, call Robinson at 514-331-6587 ext 206 or email wrobinson@nativemontreal.com.