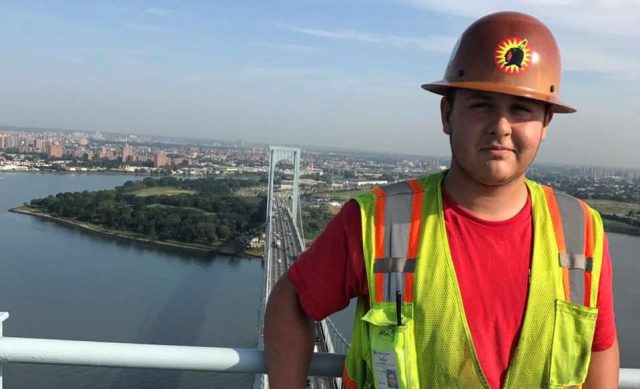 High above the Bronx skyline, Kade Stacey employs his skills as a field engineer, nabbing a job that has become more and more prominent in the industry. (Courtesy Kade Karihiio Stacey)

Kade Karhiio Stacey wanted to follow in the high steel-walking footsteps of his father Bryan Stacey; he wanted to become an ironworker.

Rather than take the ironwork course and work for an apprenticeship, however, Stacey decided to join the trade via college after some encouragement from his father.

Kade completed the three-year civil engineering technology program at Dawson College and is now working on the Bronx-Whitestone Bridge in New York City that connects Queens and the Bronx.

“The work’s been interesting,” said Kade. “I didn’t learn a whole lot about bridges in the program, so going from sitting in a class to on a bridge was hard at first, but the guys I work with taught me a lot, especially the ironworkers. They’re always showing me different ways of doing things.”

Bryan Stacey works out of local 40 and wanted his son to go to college rather than the traditional ironworker route, as he’s seen how the industry is changing.

“I’ve been doing this for 37 years, and it’s not the same as before,” said Bryan. “It was all fun and glory before and now it’s changed a lot.”

Bryan has seen more and more engineers on site in recent years, and knew Kade would have a secure future if he followed that route.

“There’s a lot of opportunity over here for them, especially in engineering,” said Bryan. “Engineering’s taking over. Before you’d be lucky if you had one engineer on the job. Now, you’ve got about 20.”

Kade is involved with steel repairs on the bridge currently, and is learning as he goes about the industry.

“I get drawings ready for them (ironworkers) for upcoming work, and with the superintendent and walking boss, we go over what has to be done and how they’d like to do it,” said Kade, who also orders bolts and steel, and tracks the progress of repairs.

While he can’t touch the ironworkers’ work, Kade is working alongside the union men, so is gaining experience in the industry as he goes.

“He’s getting the hands-on experience of working with ironwork if he ever decides one day to be an ironworker because he’s working right with them,” said Bryan.

Kade said he was still interested in getting his ticket with Local 40 or 361, as it would help towards a potential dream job down the road.

Bryan knows that Kade’s ability to finish the engineering program, sign up for an internship and get hired straight out of school is a good example for younger people in the community looking for direction in life.

“He’s independent, which makes me proud,” said Bryan. “He’s smart, he’s educated and he knows what he wants in life. He’s a very independent kid.”

Bryan said there are around 15 living in the area and working as ironworkers.

“As a new field engineer I’m not higher than anybody,” said Kade. “Even down the road, if I got a higher position, and I was on the same job as my dad, he’d be telling me what to do.”