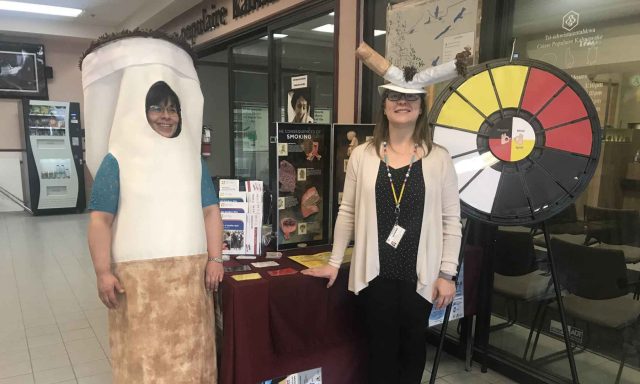 One in six Kahnawa’kehró:non are smokers, according newly released results of the First Nations Regional Health Survey.

It’s the first set of data analyzed and made public from the survey, which was conducted between 2015 and 2016 by Onkwata’karitáhtshera.

“I think there is a feeling that because of the tobacco industry in the community that more people smoke in Kahnawake than elsewhere,” said Alana Kane, health programs liaison at Onkwata’karitáhtshera

The number of current smokers in Kahnawake (15.4 percent) is slightly lower than the Montérégie (19 percent) and other First Nations communities in Quebec that have levels up to 55 percent.

“That’s always encouraging to know that the numbers are lower, but obviously we would love those numbers to be zero,” said Kane.

According to the survey, 11 percent of Kahnawa’kehró:non are currently daily smokers, while five percent are current occasional smokers, and 40 percent are former smokers.

Kane said the lower numbers among youth and young adults is “good news,” but that the data shows young smokers transition quickly to daily smoking when they hit 18 years old.

The statistics are something that the Kahnawake Tobacco Reduction Strategy hopes to raise awareness of, and lower in the future, in light of next week’s National Non-Smoking Week.

“We can’t forget that smoking is the number one changeable determinant of health. Whether it’s heart disease, whether it’s lung cancer, whether it’s diabetes – every disease process can be affected by smoking,” said Kateri Delisle, a prevention worker for the Kahnawake Tobacco Reduction Strategy.

Today (Monday), the committee will be hosting an information booth at the Services Complex, and at the Kateri Memorial Hospital Centre on Wednesday, encouraging people to take a pledge to quit. They’ll also be on K103 Radio’s noon-hour talk show tomorrow to talk about the awareness week.

“The first thing that they have to do is establish that they really do want to quit and figure out what their motivators are to quit,” said Leslie Walker-Rice, one of the handful of community health nurses at the KMHC that provides support for smokers wanting to quit and information about cessation support tools.

“It really has to come from deep within themselves, then to support that effort: What are the things that make them want to smoke and what are alternatives to do that? Even reducing your consumption by one cigarette sometimes is a big deal.”

It’s something former smoker Lacey-Jo Canadian was all too familiar with. She quit cold turkey four years ago from smoking a pack a day.

“I have tried quitting prior, and if you’re not ready, it won’t work. I think you need to be ready in order to quit because you need to want to let it go. If not, it’ll always be in the back of your mind,” she said.

“I think mine went hand-in-hand with my anxiety. It was a quick fix for that moment. It was also the addiction. I was very addicted to smoking cigarettes and, if I drank, I smoked extra.”