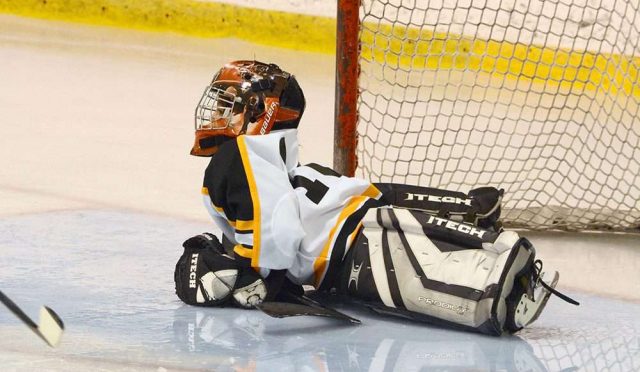 The youngest puck stars in town took the ice Friday night, as the two MAGH teams played Chateauguay at the Sports Complex. The goal for these four, five, and six-year-olds is development and fun. (Daniel J. Rowe, The Eastern Door)

Last Friday night at 6 p.m., the gates opened, and dozens of pint-sized Timbits and Mohawks filed onto the ice ready to play some hockey.

It was double the action, as the MAGH I and II teams from Chateauguay and Kahnawake squared off, and gave a chance for the youngest hockey stars in minor hockey to show their stuff.

The two games were played at the same time with each game taking up half the ice surface at the Kahnawake Sports Complex.

Donald Horne coaches the MAGH II Mohawks, and is having a blast working with the five and six-year-olds.

“I got into coaching because my son (Kirk) is on the team,” said Horne. “I always said if he wanted to play, I’d coach him. I’ve been lucky to have a lot of support from other coaches, the team manager and the parents that come on the ice during practices.”

Lou Ann Stacey has been helping oversee the program and said volunteers make all the difference. Kahnawake could in fact have three levels if more volunteers and certified coaches stepped up to fill the roles.

Kahnawake’s teams are a touch bigger than most MAGH teams, with benches having around 16-18 kids for games.

Practices, Stacey said, are generally less well-attended, making it harder for coaches to develop their players.

“The problem is not all the kids come,” she said. “The difficulty is in some practices, you’re lucky if you have six or seven kids.”

The goal at the MAGH level is simple: development and enjoyment.

“Our main goal is to get the kids to enjoy playing hockey that will keep them playing year after year,” said Horne. “We work on the basics of skating, carrying the puck, passing and shooting and have tried to refine and expand their skills through different fun exercises in practice.”

“The kids have developed really quick,” he said. “We also try to teach them discipline and fairness. The last 10-15 minutes of practice we usually play an inter-squad game as a reward for a good practice. The kids really enjoy that.”

Practice is where development happens and Stacey said parents should know that missing this crucial ice time will only hamper both the enjoyment of the game and skill development.

“The biggest, biggest thing is to have the commitment,” said Stacey. “What happens is when a coach is trying to coach and the kids that are coming do get better. If your kid misses three or four or five, they fall behind and it’s frustrating because the coach is starting back over. It’s kind of hard.”

MAGH is about development, pure and simple. Part of developing into an athlete is developing habits early such as the benefits of showing up to practice regularly.

The reward is on the ice.

Horne has taken his team to MAGH festivals in Mercier and Ste. Martine, and played exhibition games in other communities.

“It’s great to watch them play,” he said. “They get so excited, win or lose (they don’t keep score), and when they do score, to see their smiles on their faces is special.”