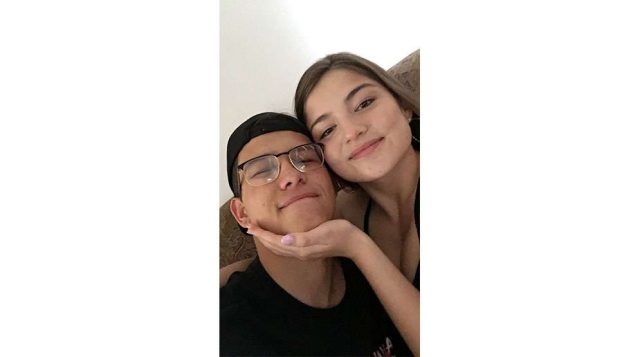 Donovan Thompson and his girlfriend Kwahará:ni Jacobs know full well the benefit of having knowledge of mental health issures such as depression. (Courtesy Donovan Thompson)

If your teenager has a cold, you can make them some soup. If they have a headache, give them a Tylenol, but what if your son or daughter is feeling the grey weight of depression, and nothing you do seems to make a difference?

Kwahará:ni Jacobs suffers from depression, and spoke about some of the struggles she faces.

“It’s a big nuisance in everything,” said Jacobs. “You pity yourself a lot, but even when you’re not pitying yourself you still want to be able to do everyday things and functions… It’s more feeling numb a lot of the time, feeling unmotivated.”

“We’ve been doing it for the last few years,” said trainer Christine Taylor. “It’s certified training from the mental health commission of Canada.”

Next week’s training is specifically designed for those involved with youth.

“Developing mental problems look different in youth,” said Taylor. “They occur differently in youth than it would be for the help you would offer somebody who already has an established mental health issue.”

Jacobs said having her boyfriend Donovan Thompson knowlegable of her condition and helpful where he can be makes a big difference.

“A lot of the times I feel guilty for not being able to comply to things that I wish I could,” said Jacobs. “Not being able to participate in things or not having the energy and feeling like you’re just lazy. I’m really lucky that I have Donovan because he’s understanding of that, so if I’m not able to do something, he’s able to reassure me.”

Taylor has been involved in about a dozen such trainings and has noticed the positive effect on the participants.

“The feedback that I get from most people that go through this is that they really appreciate the information and it offers them a little more confidence in terms of not diagnosing – because it has nothing to do with diagnosing – it’s really just having somebody find the way to help somebody who’s developing a problem, but also in terms of a crisis,” said Taylor.

The workshop will include sessions on suicide intervention, anxiety attacks, mood disorders, eating disorders and other crises related to mental health.

“One of the biggest parts is where to go from there and how to support them in terms of getting help,” said Taylor. “The earlier things are treated and taken care of, then the outcomes are so much better.”

A huge stumbling block for those working with people suffering from mental health issues is overcoming a stigma that comes with the illnesses. Taylor said Kahnawake is no exception to this rule.

“For sure,” she said. “That’s also one of the bigger sections that we talk about as well, talking about stigma. Thinking about how a young person – it’s detrimental to them to be stigmatized because then they don’t reach out to get help. It stops people from asking for help or revealing problems they might be experiencing, and they keep it internalized.”

Taylor said past participants in the program have used strategies introduced in the sessions, and have had success overcoming their internalized stigmas and helped family members with their issues.

“People have come back and told me that they never realized how maybe sometimes their lack of knowledge has stigmatized certain people in families and that by looking at it from a different perspective, it makes a big difference in terms of helping and it has helped for a lot of people,” said Taylor.

Kyle Zacharie is the other trainer for next week’s session and those interested can contact KSCS at 450-632-6880. Space is limited, and lunch is provided for both days.

Thompson, whose mother also suffered from depression, sees the need for such training as he said understanding her mental health has helped him be a support for his girlfriend as best as he can.

“With Kwahará:ni I see a lot of people that care about her that want her to get better, but they can’t do that, nobody can do that for her,” he said. “I know that I’m not responsible for her to feel happy. I’m responsible to her as a boyfriend or whatever she needs me to do.”