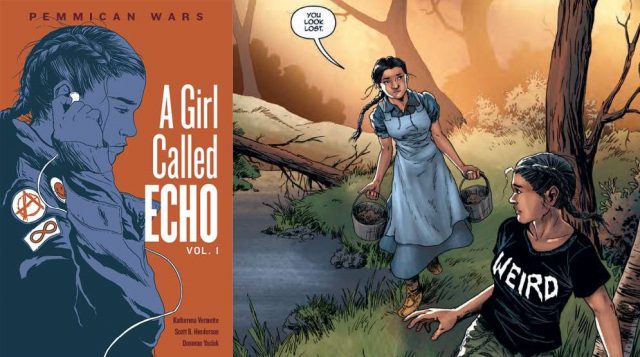 Katherena Vermette’s prowess for storytelling continues to grow with her first venture into comics that blends her ability to dredge the urban landscape, while taking readers on a historic journey. (Courtesy Portage and Main Press)

If you have not heard of Katherena Vermette yet and consider yourself a reader, please don’t tell anyone the second part if you have to admit the first.

The award-winning Metis writer blasted onto the scene with her first book of poetry North End Love Songs that won the Governor General’s Literary Award for poetry in 2012, and her novel The Break won Amazon.ca’s 2017 First Novel Award.

The Eastern Door has reviewed her work, and followed her career since the beginning and was excited when word of a graphic novel by Vermette was upcoming.

Vermette’s newest work is her first foray into the graphic novel genre with the first volume of Pemmican Wars (Portage and main Press, $15-18.95) now on the shelves.

A history class lesson, however, changes things as she discovers a connection to her past, and is transported to an 1800s era bison hunt on the Saskatchewan prairie.

The comic strip bounces between the two timelines, and chronicles the beginning of the tensions between settlers on the prairies, their leaders, and the push back from Metis and freemen, whose livelihoods are threatened by legislation aimed at severely crippling their way of life through the buffalo hunt.

At the same time we see Echo’s modern world and can connect with some of the issues facing Metis and other urban Onkwehón:we girls today.

The initial volume is very simple and straightforward in presenting what suggests will be an important addition to the graphic novel world.

Echo’s character fits the urban Metis character type that so vividly came to life in Vermette’s novel, and the first volume leaves you with enough mystery that you want to know more.

A telling series of frames involves Echo visiting her estranged mother, and though there is not much dialogue, and the institution her mother is in is not named, it’s clear there is a lot more to this story that will come out in future volumes.

High school teachers should take note of Pemmican Wars, as it hits on two fronts: illustrating history and showing the reality of a Metis girl adjusting to a new life and attempting to navigate an at times tough landscape.

The only problem with serials is that you have to wait for the next volume.