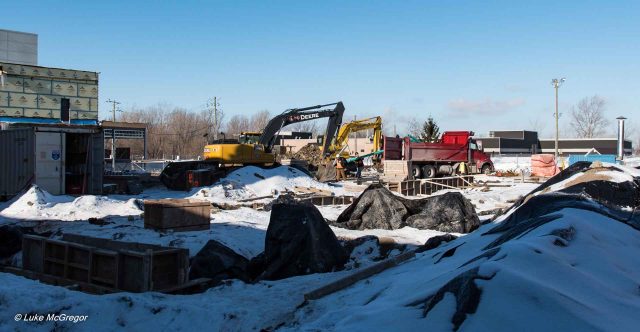 A series of things, he told The Eastern Door, led to his resignation from the job, including continual late payments that hindered his ability to pay his workers; and a rude awakening when the Kahnawake Labour Office told him he was severely underpaying his men – all of which spelled big trouble for CMC.

CMC was sub-contracting under non-local company EBC, and was taking care of interior systems; including drywall, plastering and painting.

Montour was reluctant to take on the KMHC job at first – bigger jobs mean different issues and problems, including working with architects. The height of some of the walls, for example, meant more risk and difficulty.

Half of Montour’s men didn’t want any part of the “big job” but they went for it anyway, since the economy was slow.

Montour said he went to Louis Stacey, occupational safety and construction manager at the Kahnawake Labor Office, but, he said, he was told the KLO still did not have a fair wage for carpenters – something Stacey refutes.

“There is a fair wage for carpenters and there was when he came to the CPU (Community Protection Unit/now Public Safety),” said Stacey. “His main concern wasn’t the fair wage; it was getting his worker’s competency cards to be able to work at the hospital.”

Under the Fair Wage Agreement, journeyman carpenters are supposed to earn $36.67, with three levels for apprentices – $22-$31.17.

In order to set what Montour thought was a fair wage for the hospital job, he called a meeting with local contractors that week so he could send in his bid. The feedback he got was $15-$22 an hour was the range local workers were paid.

Thirteen months after the KMHC contract was signed, the Labour Office sent public safety inspector Dennis Leborgne to CMC’s worksite trailer and handed paperwork to the men with the fair wage rates that said, “know your rights” on the bottom.

Put in a position where his men were grumbling and threatening to walk off the job, Montour gave them between $2-$4 per hour raises – which he said worked out to over $165,000 per year for his 40 workers.

“I said ‘if you guys want to hurt me, tell me now, I’m going shut down and we all go home.’ They said they wanted to work. I said ‘okay, we’ll go to work but I don’t want to hear anything else about this.’”

“I really hate to go back and forth with somebody from this community but I feel stuck here now,” said Stacey. “He has a lot of inaccuracies to what he’s claiming. I did send Dennis Leborgne to the job site after numerous people came to see me to ask what the fair wage was they were supposed to be getting.

“The end result (of the Fair Wage Agreement) is for contractors to make money, for employees to make a decent living, and for the end user, the owner, to get quality product,” said Stacey. “We gotta start changing our way of thinking in this community.”

The problem of enforcing the fair wage, or even Mohawk Self-Insurance here, is two-fold, according to Stacey: there is no current Kahnawake justice system in place, so those who fail to comply with the fair wage agreement cannot be taken to local court.

The second issue is the Mohawk Council is reluctant to go to outside court.

“For any contractor in Kahnawake, if they didn’t know about the labour agreement then they’re not following what’s happening in their industry when it comes to employers, employees or governments,” said Stacey.

“We didn’t force him to pay them, we encouraged him to pay the workers what they’re rightfully entitled to, but nobody came down with a hammer or iron fist on him. He actually didn’t even do it – a $2 an hour increase is not a fair wage.

“If an employer refuses to pay the fair wage there’s nothing we can do,” Stacey said.

Montour said if he knew the fair wage number in the beginning, his bid would have ballooned to over $4 million to cover the extra labour costs.

“The hospital project, from the onset, meant the Kahnawake fair wage rates would apply or the Quebec collective bargaining rates,” said Stacey. “Everyone knew that. Maybe there was a miscommunication between Chris Montour and the EBC at the time, but the labour agreement clearly states the fair wage applies.”

“Our ultimate goal is to make sure workers in the community are paid a fair wage,” said Mohawk Council labour portfolio chief Rhonda Kirby. “If they went outside the community (to work), they’re certainly entitled to those wages and benefits. And that’s something we want to happen here.”

After CMC left the hospital job, EBC put out its own tender to Montreal companies, but that was quickly quashed.

“We put a stop to that and said ‘not so fast. We have other contractors in Kahnawake and whether they’re big enough or competent enough, look at them first,’” said Stacey.

“We want to make sure from now on that everybody is in the know, what the agreement entails, and we want to move forward,” said Kirby.

“We realize that we don’t have workers for all of the trades that are needed within the project but we were hoping to put as much local content as possible, where we can.”

The tendering process deadline for CMC’s unfinished work is today, and Kirby, who also sits on the KMHC board, said time is of the essence as the hospital is roughly “five to six months behind schedule.”

“The building committee wants to make sure we’re as close as possible to the end date,” she said. “It is originally a 36-month project. I think within any major construction there are always delays but I hope at this point we can recoup some time.”

The Kahnawake labour law proposal still has to be submitted to the Community Decision-Making Process, but it’s unclear when that will happen.

“I’m hoping that once it gets into the CDMP it isn’t outright rejected, but people, including contractors, can sit down and say ‘let’s make this work for all of us,’” said Stacey.

But for right now, “we need a contractor that can get this job back on schedule and at the same time employ Kahnawake workers,” he said.

Fears of delays resulting from this summer’s Mohawk Council election are un-founded, according to Kirby.

“Council is meeting at the end of January to look at some of priorities. I would certainly like to make sure that work plans are finalized and timelines are set so when the election happens and in the event of whatever outcome, files can be continued.”

But for CMC, it wasn’t only the hourly wages that forced them to walk off the job.

Payroll cheque delays and waiting on reimbursements for “extras” not covered in the original contract eventually led Montour and his crew to leave.

In one example of what he said were three very late or erroneous cheques sent his way, there was $55,000 missing.

It was a credit for the plastering part of the contract, which he said had already been rectified.

“I said ‘I gave you a credit note on it and took it off the total of the contract.’ They said they’d fix it up in the next cheque,” said Montour.

When EBC was short $55,000 again on the next cheque, they agreed to pay him half and the other half later.

“Now I’m running out of money. I have no choice but to sign the paper,” he said.

After it happened a third time, Montour saw the writing on the wall.

“They sent me my last cheque and then I called my guys in here. I said ‘I’m not making any money here.’ I couldn’t go on spending money and find out at the end they’re not going to pay me. I’m not going to make money on this job.’

EBC’s Nicolas Gauthier, who handled the cheques payable to Montour, did not return requests for comment.

On Tuesday he announced he was leaving EBC effective next Friday, January 19.

Montour believes EBC was taking advantage of his contract and making him do extra work, insisting it was part of the signed agreement.

CMC sent EBC invoices before the holidays for most of the extra work the company did.

“I was trying to keep this job going but I got guys against me, council against me,” said Montour.

“I said ‘I’m sorry guys.’ That was the situation I was in and my gut instinct was I didn’t trust these guys (EBC).”