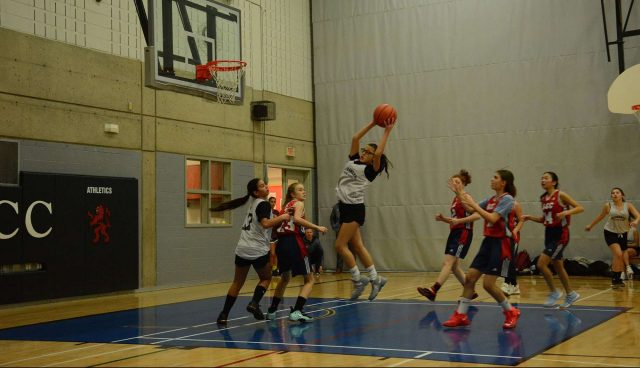 Iewenniiohstha Montour was everywhere Wednesday night as KSS had its first true test of the season in Lower Canada College. (Daniel J. Rowe, The Eastern Door)

B-ball is on, and a part of the impressive collection of Kahnawa’kehró:non female baller talent pool was in action last week on their respective unbeaten teams.

Survival has met its match.

Kahnawake Survival School’s Midget girls’ squad has blown the division three teams out of the water thus far, and the girls picked up where they left off Tuesday, beating Beaconsfield High School by a close margin for their standards, 32-27.

The girls were back on the court Wednesday at Lower Canada College, the matchup both teams were waiting in anticipation for.

Neither team had lost to that point and Survival, for the first time this season, found itself trailing 18-14 at half.

LCC’s defence was relentless and KSS may have had been surprised by their quick hands and tough shot blocking.

Survival was down by two heading into the final quarter, and fought its most intense frame of the season.

Trailing the entire quarter Watewennenhawihtha Goodleaf hit a layup with 2:50 left to tie the game at 28s. On the next play, Taiawentetie Hemlock used her quick hands on defence to steal the ball for a breakaway, but her layup just rimmed out as she was fouled on the play.

Survival was stymied for another point and LCC won 33-28.

“We worked really hard but they just had their plan and it worked out,” said Konwashennón:ni Beauvais. “They played really well.”

Survival’s coach was glad that his team finally has a squad that matches his own.

“It was a good test to finally get competition,” said coach Christian Gaudette. “I think the girls were kind of used to playing weaker teams, and they didn’t run any plays. It was a bit of an adjustment having actual defence to play against.”

Tomorrow, LCC is in Kahnawake and KSS will be ready.

“The biggest thing is not turning it over,” said Gaudette. “The turnovers were crazy. I find we were dribbling right into defenders. We hadn’t played in a while, just yesterday (Tuesday) and today, we didn’t practice and kind of throwing everything together after the break. We’ll practice next week and be more prepared.”

Beauvais knows what her team needs to work on.

“We need to work better on our teamwork and we need to talk more and pass more on the court,” she said.

The three Kuper Academy Kodiak squads returned to action this week as well, all unbeaten, and all are ready to push for a banner.

“My coach made us try the plays we learned in practice and stuff, but if we played normally, the score would have been higher,” said forward Gracie Diabo.

In the girls’ second of their back-to-back contests, Kuper easily handled Riverdale High School, winning 57-29 to stay unbeaten and atop the division three standings.

Diabo said the weaker competition has not made the team lose focus, as it vies for a second banner in two years.

Fine-tuning plays is the goal in the second half of the season.

“We learn more almost every practice and we practiced them (plays) against this team, so the better teams wouldn’t know about them in the playoffs,” she said.

Stacey hit a timely nail-in-the-coffin bank shot in the fourth quarter to keep Bialik at bay, and secure the Kodiak win.

“She’s a pure shooter,” said Marquis, whose been helping the Grade 10 guard develop a quality array of shots, including the Tim Duncan-esque banker.

“I shot it way too high, but it still went in,” said the humble Stacey. “I haven’t scored in games, so it was nice to finally get one in after so long.”

How will the girls’ keep their unbeaten run going?