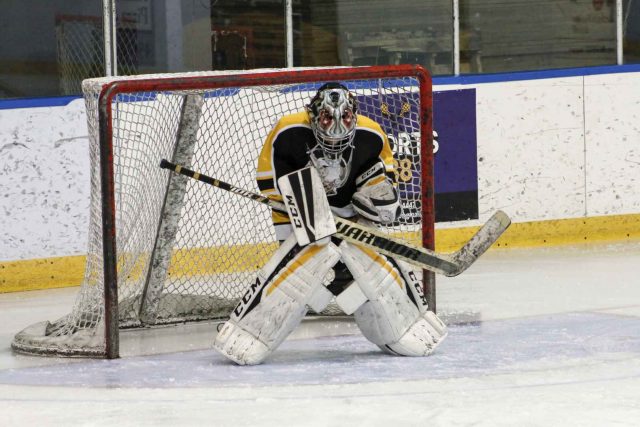 The Peewee A Mohawks continue to look for consistency as the second half of the season gets underway. (Photos by Annie Marquis, The Eastern Door)

It’s that time of year when Kahnawake’s minor hockey teams will look to build on what has been learned in the first half of the season and make a push for wins towards the playoffs.

The 2017/18 Kahnawake Minor Hockey Association’s collection of teams have had a rough start to the season, but, as in years’ past, look to continue to build on what has been learned, and move up the tables in their respective divisions.

Kahnawake has a fine collection of eager hockey players in the Novice division with the Kahnawake Minor Hockey Association (KMHA) boasting three teams from A to C level.

The developing Novice C team coached by Justin Horne has proved through the first half of the season that it has some quality and is sixth out of 17 teams with a 3-4-2 record.

The Mohawks lost to the Chateauguay Monarques Wednesday night.

The Novice A and B teams are hoping for their first wins of the season this weekend, and coaches Ronnie Stacey (A) and Jye McComber (B) know the skill is there and Kahnawake’s young skaters will find wins in time.

“They are doing extremely well,” said Stacey. “They have improved a lot from the first game and are getting closer to getting their first win.”

Stacey teaches his players to set personal goals that do not always coincide with winning games.

“Even if that win never comes, they are given goals to achieve each game, and milestones to overcome,” he said.

“Each player is now a contributor to the game, and they are all knowing their positions and rolls on the ice. It’s a long road, but the playoffs are at the end of it, and hopefully we can pull off at least one W before that.”

Kahnawake boasts A and C Atom teams that continue to improve.

The Atom As coached by Hunter Lahache won their first game of the season at the beginning of December against Mercier 2-0, and tied the HRS Predateurs just before the break, showing their continued improvement.

The Atom A Mohawks now have three ties and a win to go along with nine losses, and look to improve the team’s record tomorrow when the young gunners play the HRS Predateurs at noon at the Sports Complex.

Show up to the Complex at 11 a.m., and fans can check out the developing Atom C team coached by Bradley Leblanc Diabo. The Atom Cs tied the Mercier Braves just before Christmas, and have a shot at win number one against the Trois Lacs Phoenix. Noah Norton and Mikie Stacey’s Peewee A and B teams are also on the improving track.

Norton’s A squad played the Huntington Huskies Tuesday night at the Sports Complex, looking for its first win.

The Peewee B team nabbed that win Saturday night in the Tournoi Pierre Laniel in Beauharnois, beating the HSO Attack 2-1.

The Mohawks had a solid chance at a second win in two on Tuesday, playing the LaSalle Pumas, but were edged by a goal, 5-4.

The game included some controversy as LaSalle called up Jonathan Bertoldi and Naili Zakari from Atom A despite having enough players (12) to make a complete team. The two boys scored four of the five goals, thus Stacey sent an email to organizers protesting the game.

Stacey and team manager Jen Kennedy remain in conversation with tournament director to try and get an answer of why the boys were allowed to play.

Regardless of the outcome, the Peewee Bs looked solid in two games, and continue to improve.

The two oldest teams in the KMHA also find themselves in need of wins in 2018 to turn their seasons around.

The Bantam A Mohawks tied back-to-back and then won their first game in November and looked ready to move up the standings, but have lost three straight since with just two goals scored.

The results have not hampered the team though, heading into a back-to-back week of games this week.

“We are getting better and better every game,” said right winger Thahawitha Curotte.

The Bantams lost to the Chateauguay Ducs 4-1 Tuesday and played the HRS Hawks Wednesday, and now get a solid break before their next game January 26.

The eldest team in the KMHA is generally where the community starts to see how a bunch of kids playing together their entire lives pays off.

The Midget Mohawks had a heartbreakingly unforgiving December that could have been three wins but winded up a tie and two one-goal losses to drop the team to 2-7-2 on the year.

The Midgets have the weekend off, and are back on the ice Thursday to face the Huntingdon Huskies at the Sports Complex.