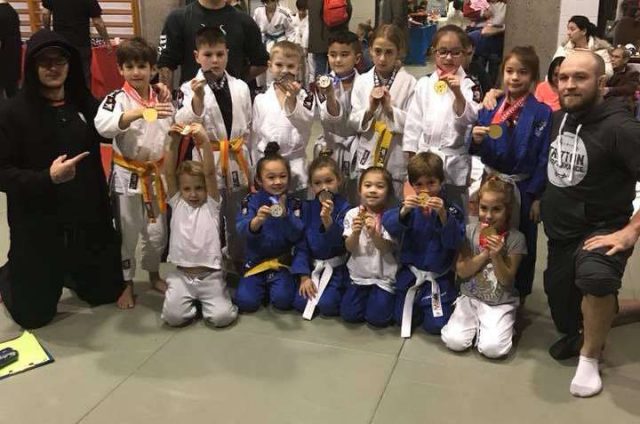 The crew of judoka that train out of Tritton Performance under the former Olympian look set to take the region by storm in 2018. (Courtesy Nick Tritton)

In 2018, expect more judo in the pages of The Eastern Door as more than a dozen young boys and girls from Kahnawake continue to impress in the sport.

A dozen came back with medals from the Tournois Olympic before the holidays, and trainer Nick Tritton has seen the eagerness from the kids who flock to his Tritton Performance gym in the St. Henri neighbourhood of Montreal.

Before the Tournois Olympic, Tritton brought four local kids to the provincial qualifier for the nationals, and Yemi Diagne came home with a gold medal, Nick Cross a silver and Jaida Diabo a bronze.

“There were over 700 athletes from across Quebec competing at this provincial qualified, so we showed we are right in the mix of where we want these kids to be performing,” said Tritton.

At the regional tournament, a dozen kids brought home medals out of 18 that went to the competition.

It was Phillips’ second medal of the year having already won a bronze in a previous tournament.

“It feels good,” said the eight-year-old. “I flipped a girl.”

Phillips has been training for a year, and loves practicing the sport.

“It’s a good thing to do and I wanted to train a lot,” said Phillips, who is looking for another gold in 2018.

“A lot of kids competed in their first event and some were just getting extra matches, and a final event before the Christmas break,” said Tritton. “We went to this tournament and absolutely dominated the event, as a lot of our teams’ “losses” were to our own teammates.”

The kids will have a chance to shine within the month at the provincial Coupe Gadbois tournament January 20, and the team moves to a team qualifier February 10 in Jonquiere, Quebec in the Saguenay region.

Only Nick Cross is old enough to compete in that tournament, as it’s a qualifier for nationals.

March will bring the Montreal Cup, which is the final prep tournament before the provincial championships in April.

Tritton is excited to see the program’s success, and knows there will be more medals to come in the coming year.

“Overall the program has been a success from both the competitive side and mental side,” said the former Olympian. “We are a team here, and it doesn’t matter what your skill level is in our practice or club, as everyone and anyone is welcomed in as family. It’s been a process to build it to this point, but it’s coming together quite nicely.”

Tritton’s goal is to build quality athletes with a dedication to the tenets of judo in his program.

“Not only the athletic and competitive aspect, but the discipline, mutual respect and commitment to not only self-improvement, but to improve as a team both on the mat and in everyday life,” he said.