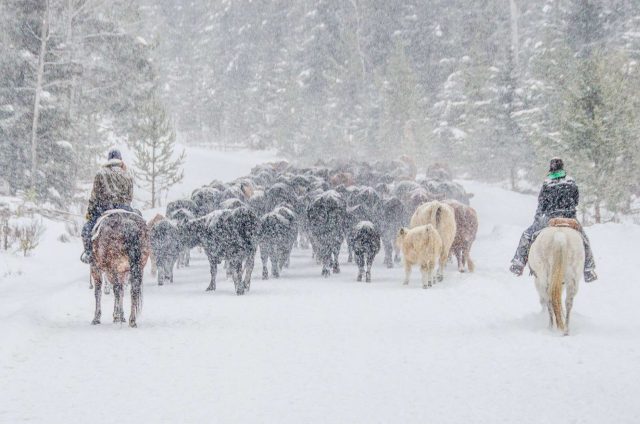 Photographer Ben Louwerse’s stellar cowboy shot is an example of how to do it right. (Courtesy Ben Louwerse)

Ben Louwerse is a photographer gifted with being born in the ideal landscape to capture images in the snow, BC’s interior, and he has not hesitated to take advantage of the locale.

“It is just what I have to work with, but I do also really like the uncluttered aesthetic that you get from everything being covered in snow,” said the photographer, who spends his summers fighting fires in the mountains of the Pacific Northwest.

“It kind of simplifies images and helps to make the subject stand out a lot more.”

Take Louwerse’s pic of (actual) cowboys leading a herd of cattle on horses. The snow is clear, the cattle are clear, as is the falling snow. The image could be put up above any mantle and tie an entire room together, but could have been lost if care wasn’t taken when shooting.

Or the husky pic… I mean… Come on!

“You can also get some really striking images using bright colours as they have a tendency to really pop with the monochromatic backdrop of winter,” he said.

Okay, so how do you get that perfect winter pic?

How do you avoid your pic looking like a black blob in a sea of white?

First, Louwerse said, you need a proper SLR camera, and you NEED to work with the settings and not just shoot using the “auto” setting.

“The main challenge with winter photography is that snow is very good at reflecting light, which makes it hard to get the contrast that makes the details that you want to stand out,” he said.

“Taking photos in the “auto” mode relies on the internal light sensor, which will pick up the snow as being too much light and so the camera will compensate by underexposing photos, making them too dark.”

If not “auto” setting, then what?

Embracing the manual setting and figuring out the glories of F-Stop, shutter speed, ISO and lighting settings will change your pics from “awww. That’s nice” to “holy crap! How did you get that?!”

Look at Louwerse’s two pics this week, and you’ll see the point.

“Our eyes tend to compensate for the amount of brightness from the snow, and so they will make us think that the photos we look at on the camera are brighter and more exposed than they actually are.”

If you’re unfamiliar with what each setting does or how to adjust them, Google search. There are a million camera nerds online willing and able to help.

Your equipment’s temperature is also important to keep in mind. Cameras, like your car, iPhone, calculator watch and computer, are affected by cold and you have to keep that in mind.

“Try to avoid lots of hot-to-cold transitions with the camera to avoid fogging up the lens,” said Louwerse.

Those using iPhones or other smart phones can also get a quality pic in the snow, but, again, need to remember that taking an extra second will result in the better phone.

“Keep the battery warm and use the HDR setting,” said Louwerse of using an iPhone. “The HDR setting will help to account for the light sensor misreading the snow as light.”