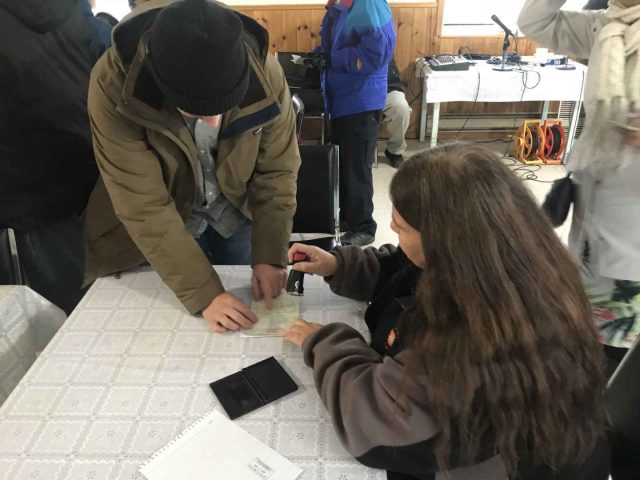 On the final day of last week’s three-day workshop in Kahnawake, participants from across the globe lined up and had their passports stamped by assistant secretary of the Mohawk Nation at Kahnawake Lynne Norton. (Photos by Daniel J. Rowe, The Eastern Door)

Leading up to this week’s United Nations Convention on Biological Diversity at the Palais des Congres in Montreal, Kahnawake hosted around three-dozen international participants for three days of workshops and talks.

Participants from around the world descended on the Host Hotel on Highway 132 for two days before finishing the workshop Friday at the 207 Longhouse’s Cookhouse.

Last Thursday, the longhouse hosted a potluck dinner and social where participants from across the globe exchanged gifts, words of encouragement, dances, songs and other aspects of culture.

“That really went great,” said Mohawk Nation at Kahnawake secretary Kenneth Deer, who helped arranged the workshop. “Professional conference goers were saying this is the best food they’ve had at a conference.”

The workshops gave participants the opportunity to develop plans and projects related to biodiversity.

“The participants here from different parts of the world are all undertaking some form of activities around mapping and monitoring,” said Joji Cariño, senior policy advisor for Forest Peoples Program originally from the Philippines.

Forest Peoples Program works with forest-dwelling people to help secure their rights and control over their lands that are often threatened by industrial development.

The mapping and monitoring workshops last week were meant to help those Indigenous people negotiate with governments seeking to develop on their lands.

For example, in Guinea or Indonesia, Cariño explained, palm oil, pulp and paper mills, and other resource industries enter lands without required consent, and the working groups aid in mapping their territory and giving communities a hand in showing governments their rights to land.

“For example, the group in Indonesia was able to show where their traditional territories are and they were able to excise that out of the palm oil plantation. Many communities are being told that they have no alternatives or options, so they say yes to the palm oil company, but get hardly any benefits or get displaced.”

The workshop in Kahnawake helped those attending this week’s conference in Montreal by polling other communities’ situations and finding practical, modern solutions to their issues.

“People have found it very useful because not only did we hear the experiences of the different communities, we also had a discussion on the appropriate technologies to address the mapping and monitoring needs,” said Cariño.

Cariño was excited to hold the workshop in Kahnawake after she contacted Deer about holding it in the community, knowing the conference would be in Montreal.

“It has, of course, been fantastic to be here,” she said. “We’ve worked with Kenneth for many years, and we’ve always been inspired by the Haudenosaunee and the leadership they’ve shown in the UN work.”

Viola Belohrad is originally from Austria and works in Cameroon, and embraced her opportunity to visit an Onkwehón:we community on Turtle Island for the first time.

“I’m very happy to have had the chance to come here and be on Kahnawake territory,” said Belohrad. “I feel like I’ve learned so much and it’s really expanded my horizons. It’s been a big inspiration for me to hear about the struggles of the Mohawks here, and the amazing successes that they’ve had.”

Returning to Cameroon, Belohrad wants to share Kahnawake’s experiences with the Indigenous people she works with in West Africa.

“I think they’ll be able to draw a lot of inspiration as well,” she said.

The participants stayed throughout the community, and Deer was happy to prove that an international workshop of this type could happen in town.

“I thought what was incredible about this was that we could host it in Kahnawake,” said Deer. “We booked every single hotel room and B&B in the community, so we were able to have them all here in the community at the same time.”

As a highlight to cap off the sessions, participants lined up on the final day while Mohawk Nation at Kahnawake assistant secretary Lynne Norton stamped their passports with a Haudenosaunee stamp at the Cookhouse.

“I was so amazed by the hospitality we have been shown here,” said Belohrad. “I’m sad that I can’t stay longer.”

Deer has attended conferences and workshops for decades around the world, and he was happy to play host for the first time.

“It’s like giving back,” he said. “I’ve been welcomed in conferences all over the world, so for me it’s like reciprocating to do that. Maybe we can do it again because we have a better capacity to host people in the community.”