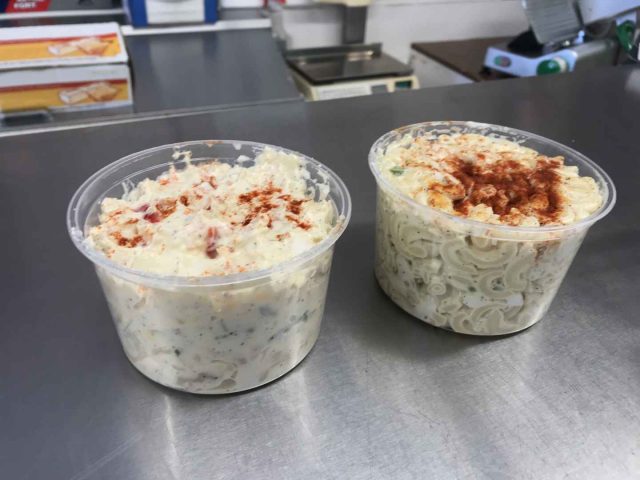 Whether you love it or hate it, mayonnaise-based salads are a staple on Kahnawake dinner tables for special occasions, and the holidays are no exception.

My family, like many others in town, always have a bowl of potato salad and macaroni salad on the kitchen countertop ready to spoon heaps onto your plate during Christmas dinner.

At least with the recipes my family makes, they barely look indistinguishable from each other. There are eggs, a lot of mayo, and either boiled potatoes or boiled noodles.

Allegiances for either one run deep, fierce, and this week, in a totally unscientific poll, The Eastern Door wanted to find out which salad really prevails in the hearts and stomachs of Kahnawa’kehró:non and other Onkwehón:we in the surrounding communities.

“Potato salad is for peasants,” he said.

Neither really elaborated their despise for potatoes, but well, neither did any of the spud supporters I talked to.

“When it’s good, it’s better than anything,” said Cory Phillips about the taters.

For an entire week, I had a poll on Facebook asking which people prefer to eat during the holidays.

“These are the important questions of our lives,” said J.D. Saylor.

He may have been being sarcastic, but yes, it is totally important. When one has to unbutton their jeans at the end of Christmas dinner because there’s so much food to choose from, important decisions need to be made, and one dense glop of mayonnaise-smothered substance just might not make the cut on everybody’s plate.

Um. Potatoes and potatoes go great with each other, obviously, and it was proven in the early days of the poll. However, out of the shadows emerged macaroni admirers, taking a 53 percent victory in the last hours of the poll.

“How is macaroni pulling ahead? The vote is rigged,” said Jennifer Brazeau.

She wasn’t the only one rightfully upset with the results.

“All this shows is that 53 percent of people made a poor choice,” said Orin Loft.

“I am surprised and disappointed,” added spud supporter Brianna Montour.

Others had a more peaceful, wholesome, and indecisive view on the dinner choices.

“I love both of them,” said Maylan Jacobs.

“This choice is impossible,” she said.

Not only were strong potato and macaroni fans vocal, but the loudest of them all were those who despise both.

“What? No carrot Jell-O on the list of gross things no one should eat but always wind up at a church pot luck?” Eastern Door assistant editor Daniel J. Rowe asked.

Not surprisingly, many also vocalized their preference for coleslaw, or a salad with actual leafy greens.