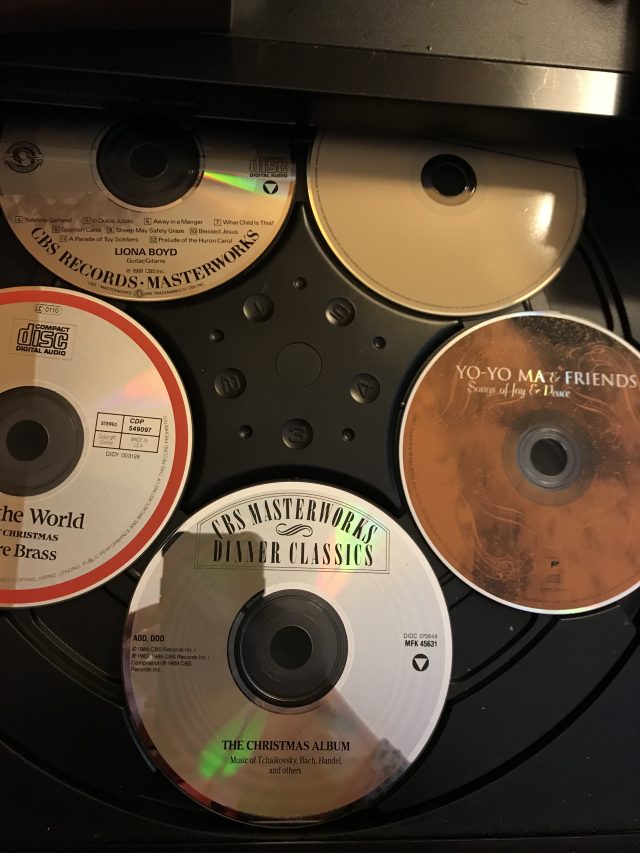 Kathleen Rowe (aka mom) is ready to rip out the Christmas music, but you’re not going to find any of her fine collection of classical gems on Billboard because apparently, the populous likes garbage music. (Courtesy Kathleen Rowe)

One of my favourite questions to ask at the trivia night I host every third week at Brutopia pub in Montreal involves the Billboard 100 list of top songs.

There’s something about a song going number one that speaks of music and culture and moments in time all at once.

Billboard also posts themed lists, and last month I asked the crew of nerds at trivia night for the top five from the “Holiday 100” based on downloads, views on YouTube, and digital sales.

Everyone got the first one, Mariah Carey’s “All I Want for Christmas is You.” No surprises there. It’s poppy, Christmasy, cute, and catchy. Mariah Carey, by the way, tops the Billboard a lot.

“Hallelujah” performed by the Pentatonix.

First, this is not a holiday song, and anyone who isn’t listening to the original Leonard Cohen or stellar covers by Rufus Wainwright or Jeff Buckley is doing themselves a major disservice.

“A Pentatonix Christmas” is a) an album I’d never even heard of and b) super popular. It’s full of classic carols, and contemporary Christmas songs, but I don’t get why Cohen’s masterpiece is on the album. This is not a Christmas song, hipsters.

Furthermore, in the video they’re all walking in a desert or something.

Whatever that’s all about? Not any winter holiday I’ve heard of.

And what exactly is these guys’ “look.” They’re are all distinctly “ethnic” in different ways. It’s like the same machine that makes the models in a Gap calendar made them.

The thing is, the next eight songs in the top 10 are all ones you would think of when you think of holiday songs: Rockin’ Around the Christmas Tree (Brenda Lee), Jingle Bell Rock (Bobby Helms), Feliz Navidad (Jose Feliciano), Mary, Did You Know? (Pentatonix)…. Wait. Them again? Why haven’t I heard of this group? Am I that out of it?

The two Pentatonix songs finished ahead of A Holly Jolly Christmas (Burl Ives), The Christmas Song (Nat King Cole), and It’s the Most Wonderful Time of the Year (Andy Williams).

Not that I know everything about music, but I’ve been in a mall before and am pretty sure I’ve heard Bing Crosby’s “White Christmas” (no. 12) about a million times. Why haven’t I heard of this band or any of their songs, or the word acapella since the Nylons stopped putting out albums for that matter.

Almost 145,000,000 people viewed “Mary, Did You Know?” on YouTube, and I hadn’t heard it once before I annoyed everyone at work listening to it.

Then, once in the YouTube vortex, I had trouble getting out of it.

The Pentatonix cover “Bohemian Rhapsody” too, do a lot of tribute mash ups to artists like Michael Jackson and Daft Punk, and performed a Star Wars tribune in 2015 at the American Music Awards.

Alright, am I the only person who didn’t know who this band is?

There came a point when writing about how much I hated their version of Hallelujah that I think I may have become a fan and watched about 12 of their videos.

Time to get out of the vortex, and talk about Christmas songs, and the silver lining in this rant.

Anyone who’s worked retail at a mall or big box store during the holidays grows to truly hate the majority of the ones that get played a lot. Silver Bells holds a particular place of horror in my life.
Realizing that I didn’t know who the Pentatonix were before asking a question about their popularity means not having worked at Toys ‘R Us since 1999 and it means I have dodged a bullet I suppose.

That MJ tribute was pretty cool though.

I will admit that.