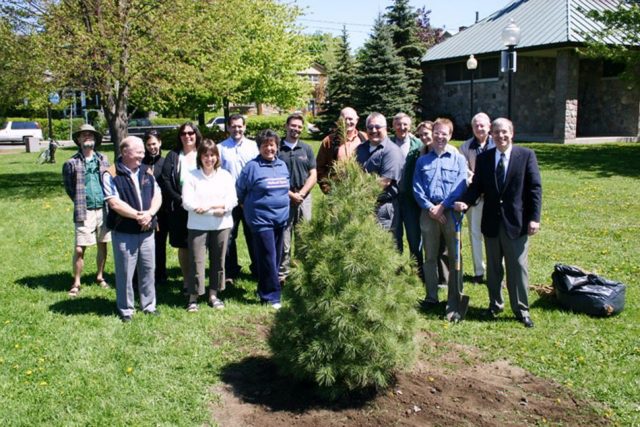 Several representatives from the Mohawk Council of Kahnawake were in Ste-Anne-de-Bellevue in 2005 for a tree planting ceremony, which will now have a plaque recognizing Kanien’kehá:ka. (Courtesy Ryan Young)

The city of Ste-Anne-de-Bellevue will unveil a new historical plaque this week, recognizing the Kanien’kehá:ka presence in three languages.

“It’s about time. To me, this is kind of the first step,” said Ryan Young, a municipal councilor and teacher at John Abbott College.

“I hope it’s the first step towards more and more initiatives like this, and maybe a stronger friendship/relationship between our two communities.”

The plaque will be unveiled in Kelso Park on December 14 next to a growing white pine, which was planted in 2005 through a Tree Canada grant. The project also involved collaborating with the Kahnawake Environment Protection Office to plant trees at several local schools in the community.

“Not only are we planting trees in our own community, we were also reaching out to a First Nations community nearby and wanting to establish a relationship to give them some trees,” said Young.

“After we did the planting in 2005, we thought it was a good idea to put up a plaque right away, but the city never got around to it.”

Young said the Montreal’s recent reconciliation efforts, as well as work being done at John Abbott, pushed the initiative forward to install the historical plaque near the tree that now towers at 15 feet.

“For me, I was really happy to see the city of Montreal change their flag to include the Mohawk presence with the white pine in the middle. I feel like in St. Anne’s, this is a similar initiative,” said Young.

“I think it’s sad that for years and years, and years, we’ve never had any kind of historical plaque – and our town is very historical – that talks about the presence of Indigenous people, ever.”

The text on the plaque will be written in English, French, as well as Kanien’kéha, which was translated by Callie Karihwiióstha Montour.

“It’s an honour to be a part of this project and to know that our language will forever be embossed in this plaque. It may not seem like much, but it’s amazing to me that something I translated will be physically left behind long after I am gone,” said Montour, an alumnus from the Kanien’kehá:ka Onkwawén:na Raotitióhkwa Language and Cultural Center’s Kanien’kéha Ratiwennahní:rats Adult Language Immersion Program.

She stared the two-year program in 2012 with limited speaking-skills, and since graduating has been involved in many projects wanting to include Kanien’kéha, include a street sign translation and awareness campaign.

“It’s unreal sometimes,” said Montour. “The fact that they wanted to include Kanien’kéha in their plaque showed a lot of respect for our language and culture.”

All community members are invited to the unveiling. It takes place at 11 a.m. at Kelso Park (corner of Rue Ste-Anne and Rue Perrault) next Thursday, December 14.

In the spirit of  reconciliation this White Pine was planted in 2005 in honour of the Mohawk (Kanien’kehá:ka) nation on whose traditional territory Ste-Anne-de-Bellevue is situated. It was planted as part of a tree-planting project funded by Tree Canada. The White Pine is considered to be the Great Tree of Peace by the Mohawk people and it is hoped that its presence will contribute to stimulating peace and goodwill amongst all nations.