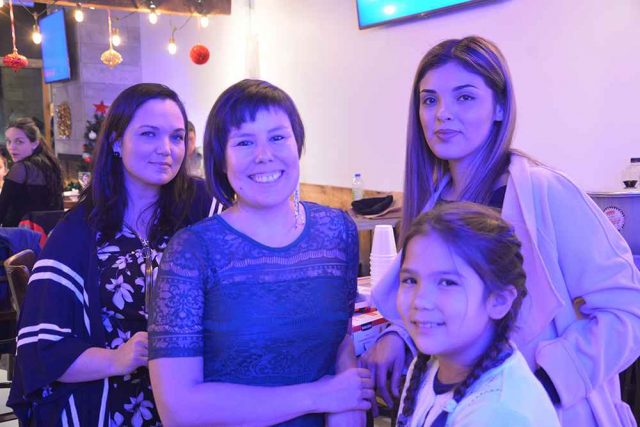 One film depicted the trauma caused to a community by an incision through the centre and soul of its village, while the other showed the physical and emotional pain caused by cancer.

Flat Rocks, directed by Courtney Montour, and Roxann Whitebean’s The Paradigm debuted at a special screening at Black Bridge Brewing Co. in Kahnawake Wednesday and drew a solid crowd of all ages to check out the two short films.

Montour’s documentary looks at 79-year-old farmer Louis Diabo’s relentless and futile attempt to halt the St. Lawrence Seaway’s construction in the 1950s, and his family’s reflections on the man who died shortly after its completion.

Russell Imrie is Louis Diabo’s great grandson, and was at the screening.

Many elders who attended the screening spoke about how the documentary brought memories back of the community before the seaway’s construction.

Mohawk Council chief Kenneth McComber said the seaway was originally planned to travel to the south of the town, but that wealthy members of the Kanawaki Golf Club stopped that plan in its tracks.

McComber and fellow council chief Christine Zachary-Deom spoke about how the construction changed the community forever.

Director Courtney Montour said afterwards she was excited that so many were eager to discuss the film after its screening.

“I used to swim there. That’s where I learned to swim, on the rocks there,” said Imrie. “I thought it was really cool. She did a great job of pulling up old footage and putting it all together. There’s so much more to it than this sentimental thing.”

From documentary to zombies, the second short film of the night was Whitebean’s The Paradigm, a blend of horror, drama and tradition drawn from the director’s battle with breast cancer.

The film is a dreamscape journey drawn from Whitebean’s actual dreams that bounce between childhood memories, zombie horror and traditional teaching.

Kitigan Zibi actress Shaynah Decontie plays the lead Thunderblanket, and said she embraced the challenge of playing the emotionally taxing role of a woman who just had a double mastectomy.

“I just took it by the horns and said, ‘I’m going to give it my all, and I’m going to put myself in her shoes, try to relate as much as I can,’” said Decontie. “I just tried to get into that feeling… I thought when I was going through the scenes, what would she feel in this situation, and that helped.”

Decontie chews up scene after scene and is an actor to watch for in the future. The film also introduces actor William Constant, who plays Mushum, acting for the first time.

“I wanted to be creative and try something different… I learned a lot and feel like it prepared me for my next drama, which will be 22 minutes.”

The directors said they would now shop their films on the festival circuit before further releases in selected theatres.