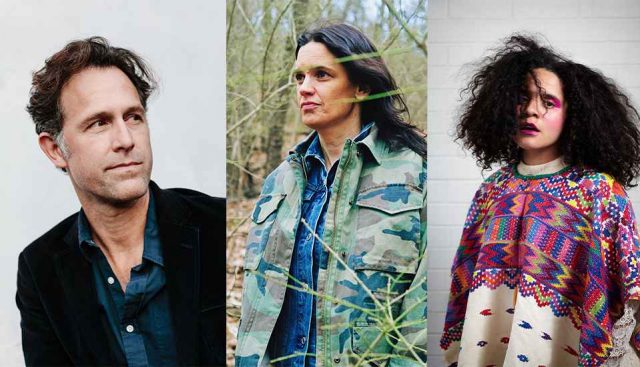 Jason Collett of Broken Social Scene wanted to take his Basement Review literary/music jams out of Toronto and across the country in an ambitious attempt at embracing new wave Indigenous art (left). Lido – AKA the “Colombian Darling” or “Soundsister,” Pimienta’s blend of electronic beats and Afro-Colombian rhythms will be on the stage at L’Astral tonight in an event that is not to be missed (right). Leanne Betasamosake Simpson is among the talented poets who will be on stage tonight at L’Astral in Montreal in the New Constellations show (centre).

How do you get from Tribe Called Red to Feist to Naomi Klein to Leanne Betasamosake Simpson, and then back again, hitting over a dozen award-winning, renowned and hidden gem literary and music artists in the process?

Tonight at L’Astral (205 Ste. Catherine West) the above-mentioned artists and more will take the stage in Montreal for a show embracing contemporary Indigenous and non-Indigenous voices.

The show grew out of a scene that had been building in Toronto for a decade.

“For 10 years, I’ve been doing this scrappy little residency every December called the Basement Review,” said singer/ songwriter Jason Collett of Broken Social Scene. “It started as a lark, but quickly turned into a half-music, half-literary variety show.”

Writer Damian Rogers handles the literary side of the show, and worked with poet Leanne Betasamosake Simpson to draw more Onkwehón:we presence to the show that only grew as the years went on.

“We’ve just been adding more and more Indigenous artists to what we do simply because artistically it’s so rich, this sort of resurgent culture and these next wave Indigenous artists, both in the literary and music world,” said Collett.

Co-founder of the Indigenous record label Revolutions Per Minute Jarrett Martineau is nêhiyaw (Plains Cree) and Dene Suline from Frog Lake First Nation in Alberta, and came on board. Martineau hosts CBC’s “Reclaimed” series, produces music and documentaries, and spoke about where New Constellations fits into his vast experience in the industry.

“I feel like there are a lot more unknowns in a way with this project, and probably another part to it that’s really different is that it’s so loaded politically,” he said.

“Even though we’re not positioning it politically in any way, just by virtue of kind of getting everybody in the same room when they’re not traditionally, and because of the existing relationships that do or don’t exist on the places we’re taking the tour, we’re stepping into some pretty heavy contexts.”

Playing in Wiikwemkoong, Prince Albert, Thunder Bay or Saskatoon meant addressing diverse crowds from communities struggling with overt violence, racism and other issues.

The show, according to Martineau, provided a venue rarely available in such places.

“When we go into Thunder Bay there were a lot of people who came out, who I don’t think are often in the same room together, and people afterwards were saying, ‘we really needed this. This community needed a show like this. It was important to see all these people up there, and to really try to have something solid happen in the community,’” said Martineau.

The crew was in the Maritimes this week with performances in Halifax and Fredericton before tonight’s performance, which will be followed by one in Ottawa and then Kitigan Zibi.

“It’s been a crazy good response,” said Martineau. “Not that I expected otherwise, but it’s been pretty amazing actually to see. One of our hopes for this project, and part of the experiment really, was both about bringing two very different communities – and probably more than two – of artists together in terms of the Indigenous and non-Indigenous artists coming together on stage and working together. We also had really hoped that would be the case in terms of the audience… People have been consistently blown away by it.”

The show bounces between music and literary acts like an old school review. Sets are short (10-15 minutes), so be it a storyteller, poet or musician, the artist is forced to kill it out of the gates.

“It brings everybody’s A-game. It’s a really good healthy friction between artists to watch their peer put on an amazing performance and then they got to figure out a way to top it,” said Collett.

Being a non-Indigenous artist, Collett continues to learn how to respectfully navigate the music scene alongside his Indigenous counterparts, and it’s a challenge he embraces.

“My job is to really try to limit the amount of mistakes that I make, and I’m going to make them,” he said. “It’s an inevitable part of the process of engaging, but one just tries to listen and learn and not make a total ass of themselves. That’s my responsibility here.”

Tickets start at $25 and are available at newconstellations. ca. Doors open at 7 p.m., show starts at 8.

The show places all artists on the same plane and lets the audience enjoy the collaboration.

“It’s not an educate-the-public show,” said Martineau. “It’s like let the merit of the work and the artists do their thing and let that stand on it’s own terms, and when you see everybody beside each other, everybody holds their own and everybody’s super strong. I haven’t seen something like that before.”