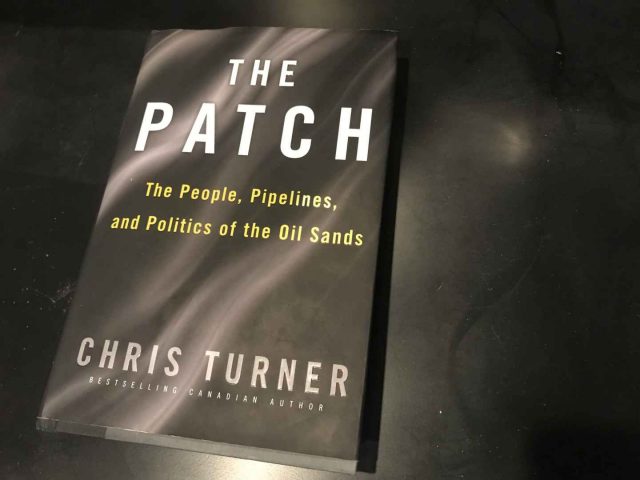 The patch and pipelines.

It’s the couple that comes with as quick an opinion as BrAngelina (they’re still together right?), and, in this neck of the woods, pretty much everyone is against the former and the industry that wed them.

The patch and pipelines have become the embodiment of the oil industry, and the focal point of the environmental protest movement seeking to reduce climate change and ensure the world isn’t ruined for the next generations.

Consider this series of questions.

How much do you really know about the oil sands mining operations in Northern Alberta? How many of the tens of thousands of people who work in Alberta’s patch have you spoken to? How much do you depend on petroleum? What are the other options for your fuel needs?

The Patch: The People, Pipelines, and Politics of the Oil Sands (Simon & Schuster, $34.99) answers many questions about the oil industry in Alberta and elsewhere, and gives a broader understanding than a slogan on an Enbridge commercial or a protest placard.

Award-winning author on climate change solutions and the global energy transition, Chris Turner’s book is an informative, well-written, and clever account that casts a spotlight on the oil sands operation, the people who work there, and the oil industry in general.

He does not waste time self-righteously condemning an industry that employs thousands of people (including ironworkers from Kahnawake), but rather is honest and respectful in reporting the many contradictions and complexities of the industry.

The reality is: everyone uses petroleum products.

From nylon to fuel to polyester to fertilizer to plastic to gummy bears, oil is everywhere.

Those pretending they avoid the resource is either a hermit living in the woods or incredibly naïve.

Throughout the 13 chapters of Turner’s book, he comes back time and time again to this reality, but also is clear and thorough in describing the many environmental sins the companies operating the mines in the patch commit.

Denendeh, the traditional territory of the Dene people, has, like anywhere in Canada, a long history of exploitation, betrayal, mistrust and, at times, straight up tragedy.

Fort McMurray, the emblematic centre of the oil sands, is a diverse city with many stories, not just one.

Political and industry manoeuvring surrounding the patch is full of paradoxes and hypocrisy.

It is easier to think of the entire region as malevolent, and, thus, those of us outside of it: good.

It’s not so simple.

Even when it comes to consultation with the Dene, Cree and Metis communities in the region, nothing is simple. There are Onkwehón:we-owned and operated companies on the patch that depend on the cash in the same way local industries help keep Kahnawake prosperous.

In the end, it is people who live and work in the area. People who drive buses, work at not-for-profit companies, try to find engineering solutions, teach at high schools, work to improve the environmental impact, and build or drive the enormous trucks that haul bitumen-soaked sand to and from the mines.

It is about people who work good jobs and support families, and ask critics to consider the alternative to getting oil from Alberta.

Should we stick to a dependence on Saudi, Venezuelan, Nigerian, or Russian oil? Should we embrace the natural gas shale fracking boom?

If Alberta’s oil stays in the ground, guess what? It’ll come from somewhere else, and everyone will continue to use it.

Your bleeping smart phone is made of petroleum products!

Turner shines a light on the evils of the industry, as well as including inadequate consultations with the nations in the region, tailings ponds issues, and the straight up dirty nature of the industry and potential health effects.

It is an excellent book. It challenges readers, and gives no easy answers. It takes aim at the oil sands in all of the industry’s dirty glory, but also points out the problems with the criticism of it.

Read this book. It is well worth the 319-page journey.

That way, the next time you think to write your distain of the oil industry or a pipeline on social media or on a protest billboard, you can at least consider your own dependence on the substance you think should be left in the ground forever.