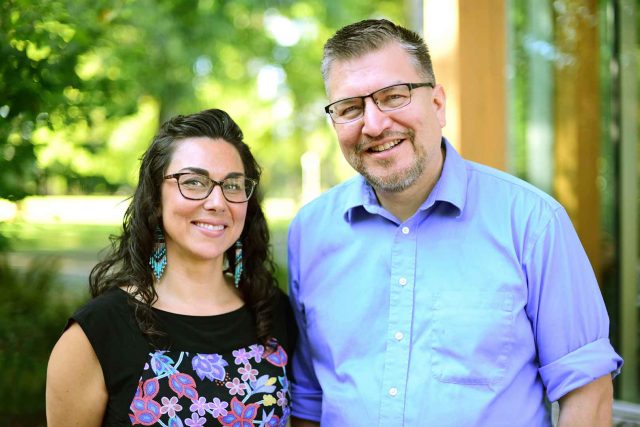 A new language revitalization project at the University of Victoria will help strengthen Kanien’kéha and several other Indigenous languages across Turtle Island.

NEȾOLṈEW̱, which translates as ‘one mind, one people’ in SENĆOŦEN (a North Straits Salish language) will engage nine Indigenous-led partner organizations including the Kahnawake Education Center (KEC) to form a learning and research network to strengthen efforts to revive Indigenous languages.

“I’m just really excited about it, and happy that we were asked to be a part of it,” said Kahtehrón:ni Iris Stacey, the Kanien’kehá:ka curriculum developer at the KEC.

“We really want it to reflect the direction to really help us strengthen and move all our programming to the next level, and this is a great opportunity to do so and to document that success as we move forward.”

Stacey is a graduate of UVic’s Indigenous language revitalization master’s program where she met both McIvor and Jacobs. The connection prompted the two to invite the Kahnawake Education Center to be a partner.

“We wanted a range of partners. We were of course really interested in partners who have a strong track record of success in language revitalization, and that’s definitely why we asked her community and the organization that she works for,” said McIvor.

“Because it is a SSHRC project, it is research focused, but each community is choosing for themselves what area they want to research in, who they want to collaborate with, so the communities will all benefit from getting to choose what to focus on that will best benefit where they’re at in their journey towards reviving their language.”

The goal of the partnership is to address Indigenous adult language learning, focusing on overlapping spheres where adults learn their language and where they are able to pass it on to others.

“We’ve come to a critical place now that we need whole generations of new adult speakers in order to actually carry the movement forward,” said McIvor.

“It’s not just about adults learning the language, it’s also about the contributions that they make and the whole system that we need to build for languages to continue into the future.”

Stacey said, specifically at the education centre, there’s a need to support their staff and teachers.

“We oversee language programming within all our schools, and the majority of all our teachers are second-language speakers, so we definitely have to insure that they have the tools to maintain and progress in their proficiency. We want to be able to support them in their language learning goals also,” said Stacey.

The KEC is a core-partner on the project with director of education Robin Delaronde and Stacey acting as representatives. Stacey is also a co-applicant on the project and Kahnawa’kehró:nonTekaronhió:ken Frank Jacobs will be acting as elder advisor throughout the partnership.

“We’re so thrilled to have the partners that we have, there’s so much amazing work happening in language revitalization in Canada that not a lot of people know about, so we’re hoping the grant itself and collaborations that come with it will also serve to education the Canadian public to help raise the profile of Indigenous languages and support for Indigenous languages revitalization work,” said McIvor.