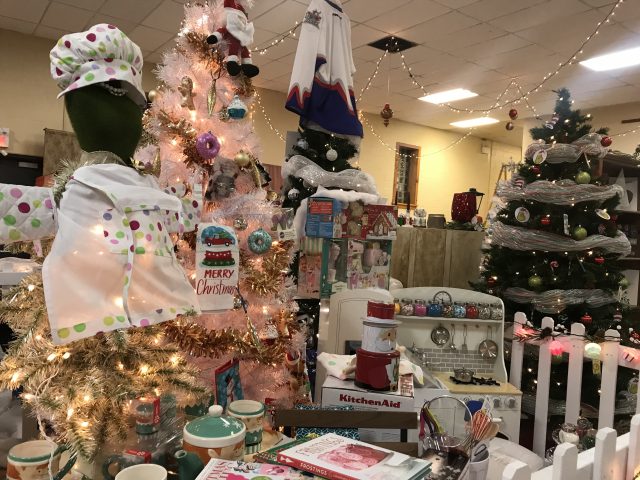 Karonhiaráhstha’s Winter Wonderland is one of the highlight fundraising events of the year and the Kateri Hall is where to go to enter a chance to win one of the incredible trees replete with treats for all. (Jessica Deer, The Eastern Door)

The third annual Karonhiaráhstha’s Winter Wonderland is underway, and the seven-day Christmas-themed fundraising event organized by the Kateri Memorial Foundation (KMF) will be run until Sunday.

“There’s more sponsors involved, so there are 24 trees this year, and we were happy that we were able to get in at Kateri Hall. They’ve been extremely generous with us storing items there, going in numerous times, setting up,” said Lois Montour, executive director at the KMF.

The annual themed Christmas tree raffle takes place  today to Sunday at Kateri Hall. The winner of each tree will receive the tree, the decorations, and all the gifts surrounding it.

“There are still people that are interested in putting up trees, but there was a point where we had to say we couldn’t take anymore because there’s an issue with space. We did have to regrettably tell some people, maybe next year,” said Montour.

“This is the third year, and I’d like to thank the bank with their Community Development Project Fund. We put in a proposal three years ago to help us initiate this event. We got our start and were able to do a really super event the first year, and it just grew, and grew, and it’s still growing.”

The event is named after Carla Skye and Iohahiio Delisle’s daughter, Karonhiaráhstha, who was featured in the foundation’s first direct mail campaign three years ago.

Sadly, the baby passed away that same year. The couple brought the idea to organize a Christmas fundraising event to the foundation, and it was decided to name it her memorial.

The very first event raised $30,000.00 to create Karonhiaráhstha’s Post-Secondary Scholarship Fund for student of Kahnawake studying in the area of health. Thus far, 23 students have been awards scholarships and prize money towards their education.

In addition to Karonhiaráhstha’s Post-Secondary Scholarship Fund, the proceeds of the Winter Wonderland will also go toward other health initiatives such as SIDS awareness, CPR training, and various health awareness education and training, as well as bereavement relief services.

“The way things are growing, even the Kateri Hall as big as it is, we might outgrow. There’s so much positive energy and everybody wants to contribute. It’s already the Christmas event of the community, I think everybody looks very foward to this event, to participate, sponsor or volunteer,” said Montour before the event opened.