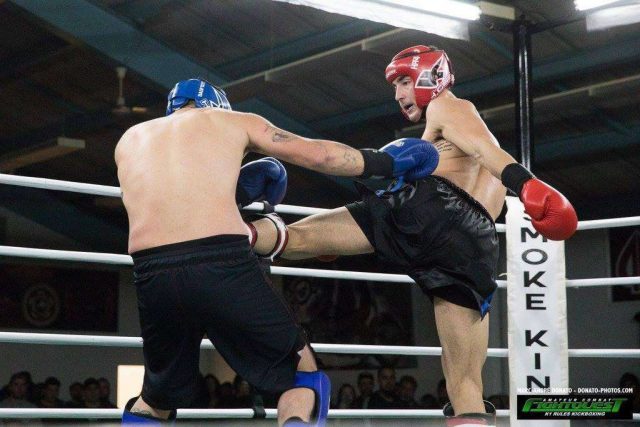 Forty-two seconds after the starting bell rang, Andrew Antsanen had Pat St. Pierre down and out as he made quick work of Fight Quest 40’s main event.

They are the words Vigneault MMA trainer Stephane Vigneault used to described Dene fighter Andrew Antsanen, who stopped the main event of Saturday night’s Fightquest with a side kick after just 42 seconds.

Antsanen’s strength and skill were too much for Pat St. Pierre of Quest MMA in Ontario.

The winner of Fightquest 40: K1 Rules’ main event in the 175-lb category had planned on showing off a lot more striking than the 42 seconds allowed.

“The side kick was just to keep distance so I could work on my boxing a little bit more,” said the former Kahnawake Junior AAA Condor, who fights out of town. “He kept coming forward at me.”

After three kicks, it was over.

“Nothing is surprising when Andrew fights,” said Vigneault after the fight. “He is a phenom of combat sport, and without doubt the best prospect in Quebec combat sport.”

Antsanen went into the fight calm, cool and collected and didn’t suffer from any jitters before getting in the ring.

“I felt great in the back warming up,” he said. “It was actually one of the first times when I was calm and felt like I saw every shot that I landed. My heart wasn’t pounding or anything. I was pretty confident.”

Antsanen did not get the chance to watch many of those shots, as St. Pierre collapsed early.

The brief tour of the ring meant Antsanen did not get as much of a chance to show what he’s capable of, but he’s not complaining about that.

“I wanted to showcase my skills,” he said. “I didn’t get a whole lot of time to do so, but I’m not going to complain about the win. Like they say, ‘the faster, the better.’”

Antsanen was set to fight at 170 pounds at last year’s Fightquest, but hurt his knee before the fight and was forced to wait.

In May, Antsanen beat his opponent in the boxing ring, and the fight lasted a third as long as the one Saturday (16 seconds or so).

“I was very precise with my punches, and I owe a lot of that to Lezis,” said Antsanen. “He took a lot of time to work with me.”

Perfection is the goal for the Taekwondo black belt.

“I don’t like losing more than I like winning,” said Antsanen. “Winning is good, but I just want to make my team proud and people proud. I work hard and bust my ass for that reason. I don’t take anything lightly. I don’t cheat myself. I just stay disciplined and work hard. It pays off. The harder you train, the easier the fight is going to be.”

Vigneault has no doubt that Antsanen will be one to watch in the coming years.

“The timing, footwork, speed, power – is at another level than the normal fighter,” said Vigneault. “I would not worry to put Andrew in a pro fight in MMA against anyone in Quebec.”