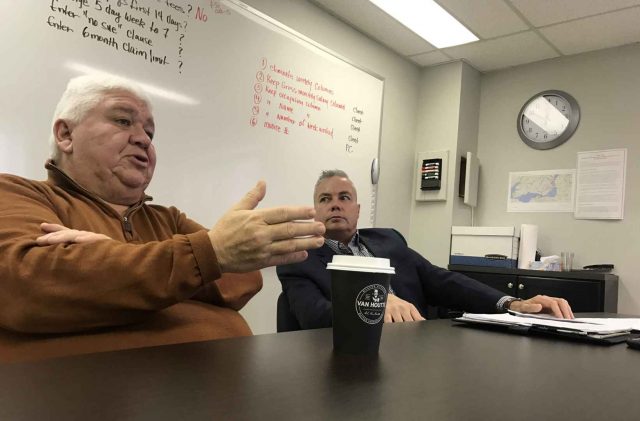 The Mohawk Council of Kahnawake approved new qualification procedures for those working in the construction industry in the community.

Monday, council passed an executive directive (MCED) approving and bringing into force the Kahnawake Trades Certification Program, which combines existing qualifications used for the construction and renovation of the Kateri Memorial Hospital Center and the renovation of the federal side of the Mercier Bridge under the Jacques Cartier and Champlain Bridges Incorporated (JCCBI).

“We’re not tying to re-invent the wheel, but we are saying this is our area, and you have to at least respect our regime and jurisdiction,” said Mike O’Brien, director of the Kahnawake Labor Office.

Oliver Montour is the office’s new certification and competency officer, tasked with enforcing the procedures and assisting those who need to meet criteria to work in the construction industry in and outside of the community.

“Safety and health in a competent, qualified worker – doesn’t matter where you’re from. You could fall off this roof right here and just because you’re in Kahnawake doesn’t mean you’re not going to get hurt – it’s across the board,” he said.

O’Brien left his position as chief of staff at the Office of the Council of Chiefs following the 2015 elections to focus his efforts on the development of the new department. The office, which is located on the Old Malon Highway, officially opened its doors in May 2016.

On a daily basis, Kahnawa’kehró:non walk through their doors looking for assistance. O’Brien said he’s seen a big shift in the attitude and understanding of the need for competency and qualifications.

“I think the biggest thing we’ve accomplished over that last little while has been moving away from the political rhetoric that we were facing before of union versus anti-union and all that bullshit,” he said.

“The office is there to help us find work, help us get qualified, and doesn’t matter where you want to work at the end of the day – whether it is on reserve under the Kahnawake regime or off reserve with the Quebec regime or down in Boston, Massachusetts or New York, New York.”

With limited job opportunities in town, the majority of work available is outside of Kahnawake.

“The construction industry is not large, but where we go as an office is to try to build our regime better inside to try to get competent, qualified workers across all the trades in the community,” said O’Brien.

As a result, the office has been growing its network, including developing a relationship with Tewatohnhi’saktha, the Commission de la construction du Quebec (CCQ), and even the Assembly of First Nations of Quebec and Labrador to work on both long-term goals to get more apprentices trained, as well as short-term helping workers that need upgraded skills or certifications.

Mélanie Malenfant, a public relations representative for the CCQ, said both organizations are working on an agreement.

“The work with the CCQ was apparent to us from the beginning, that we had a long way to go to get into this white Francophone industry,” said O’Brien.

“Will we get a specific project like we did with the Champlain Bridge out of this effort? We hope to – we hope to get at least some of those, but it’s going to be a slower process.”