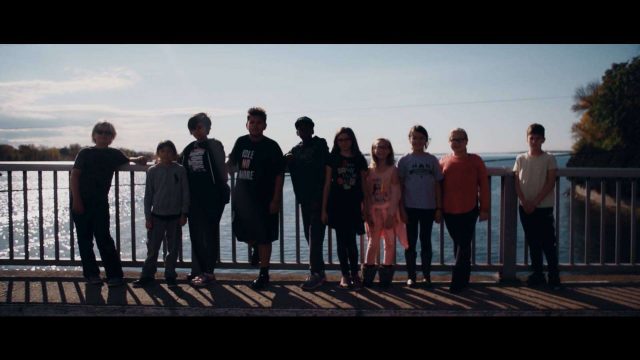 How many kids get the chance to write an anthem?

How many adults do?

Ten elementary school students from St. Willibrord School in Chateauguay can now definitively say “I did” to the question.

Lexi Horn was among those who wrote the lyrics to her school’s new anthem “Dreamchild” – and helped produce the video – which she and nine of her classmates star in.

Hearing “Dreamchild” for the first time was an amazing experience for Horn.

“I was really emotional because this is a one-time thing,” said Horn. “I’m so happy to get the opportunity to do it. I’m really proud of myself and all the others for doing this.”

The school’s gym was packed with students, parents, teachers and administrators Wednesday when the music video premiered during a special assembly.

Music teacher Caroline Bouchard spearheaded the project after looking at what the school had as an anthem before and deciding it needed a serious upgrade.

“I wanted to write a new anthem for St. Willibrord,” said Bouchard. “We had one previously, but we hadn’t sung it for years, and it was, ‘thank you God for St. Willibrord.’ We weren’t even allowed to sing it anymore.”

Bouchard wanted the song to include French, English and Kanien’kéha, and after a last-minute cancellation, Jody Diabo, currently studying at the Nova Career Centre, stepped up to help the students out with the Kanien’kéha portions of the song.

David Hodges works with N’we Jinan, a non-profit that brings recording studios into schools to teach students about song writing, sound recording, music production and voice performance, and he helped the students develop the song and video.

“Very dynamic group,” he said of the kids in the project. “Smart and vibrant.”

The video, simply put, is excellent. Though be forewarned, the tune will stick in your head for a good part of the day after you hear it.

The video pans through Kahnawake and Chateauguay, highlighting the communities’ unique spots and colourful characters.

Horn wears a ribbon shirt as a mark of her community, and Keenan Williams spends much of the video wrapped in a warrior flag wearing an Idle No More t-shirt.

The 10 students stood in front of the gym and received a standing ovation Wednesday after the video’s first showing.

Horn spoke to The Eastern Door about developing the song.

“It was really fun,” she said. “David had us do writing activities, and we had to write all about things that we wanted to do in life and things that represented Mohawks, and all the people that live in Quebec and Chateauguay and Kahnawake.”

Diabo helped the crew find spots in the community to shoot, and the video includes a special cameo from elder Charlie Patton, who invited the students into the Mohawk Trail Longhouse to teach them about Kanien’kehá:ka culture.

The reason for the project was simple.

“The goal was to create a school anthem that was inclusive and representative of everyone,” said Bouchard. “I wanted it to be written by the students themselves because it’s a song for the students.”

Exploring her and other communities in writing the song was an incredible experience for Horn.

“It was really fun because I got to talk about where I’m from, which is Kahnawake,” said Horn.