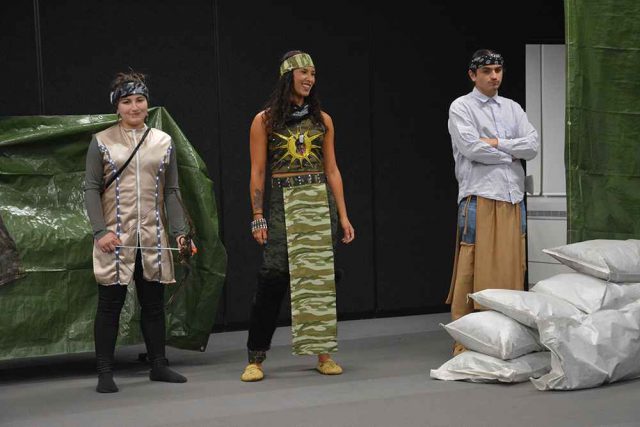 Dozens of models were clad in their best camo on Friday night for a satirical fashion show in commemoration of the 1990 Oka Crisis. (Photos by Jessica Deer, The Eastern Door)

Camouflage: It’s one of the most influential prints in Onkwehón:we activism, and was front and centre of a satirical fashion show paying tribute to Kanien’kehá:ka land defenders.

“It’s an essential for any land defender, or barricade fashionista,” said Kanien’kehá:ka activist Ellen Gabriel at the Friday evening show, which was hosted at Concordia University’s John Molson School of Business.

“In traditions that began at the barricades of 1990 in Kanesatake and Kahnawake, and have endured the test of time, camouflage is our one true friend.” Over a dozen models from Kahnawake, Kanesatake and Montreal strutted down the runway in wardrobes assembled by Sarah Beaver for the show, titled The Changing Styles.

“It was a really interesting experience,” said 18-year-old Belle Phillips, who was one of the models from Kahnawake.

“Since I was born after the crisis I was always just taught about it and associated camo with protesting an issue. Seeing that camo is kind of a trend in fashion, I find it cool knowing that the trend originated from the Oka Crisis.” The show featured many styles of camo, from bright orange jump suits, to army green baggy pants, t-shirts, leggings, halter-tops, dresses, and even an original outfit designed by Kent Monkman.

“Braving the elements need not be frumpy,” said Gabriel. “After the 1990 occupation, people wanted to express their Onkwehón:we pride with camouflage – that wonderful, diverse, clothing that can be worn anytime. From traditional army green, black and white, camouflage has an infinite use.”

For Wayne Robinson, an intervention worker at Native Montreal, being able to participate in the show was a way to show solidarity to Indigenous peoples’ “new sense of militancy.”

“I believe the resistance to Oka in 1990 was a turning point for the Indigenous community in general,” said Robinson.

“From the time I was a youth first getting into politics I naturally gravitated to wearing camo pants and Che Guevara t-shirts, and noticed that there were a few other Indigenous youths that sported the same clothes. I saw a resurgence of this too after the Idle No More movement and land defender movement picked up steam in the past few years. “When Ellen asked me to be a part, I agreed because a significant part of my wardrobe I wear each day is camo-inspired. I guess in that way maybe the satirical nature wasn’t so satirical,” he said.

Friday’s show marked the second time it has been organized, the first was held during the 25th anniversary of the crisis in 2015 in Kanesatake.

“It was such a fun experience the first time so I agreed to do it again,” said Beaver. “For me camo means that you are a force to be reckoned with and protestors that wear camo are united.”

While most of the outfits were owned by the models themselves, Beaver designed some of characters, including an outfit symbolizing a future warrior woman. “She’s from a post apocalyptic future where the government has outlawed camouflage because it incites uprising. However some camouflage has been passed down secretly through the generations as a symbol of hope and resistance,” said Beaver.

The show was organized to raise awareness of the ongoing struggles in Kanesatake with the Collines d’Oka housing development and ongoing silence from the federal government to intervene.

Proceeds from the entrance fee, as well as the auction of Monkman’s outfit, will go directly towards legal costs of opposing the housing developing. “I come from Kanesatake, which is one of the oldest Kanien’kehá:ka communities. It was the first community to accept Kaianere’kó:wa, which is the Great Law of Peace. Millions of generations of Onkwehón:we footsteps have danced, traveled, and carried their children, have honoured all our relations to their songs and ceremonies,” said Gabriel.

“This is really about honouring them, honouring the generations of Onkwehón:we land defenders who, through contemporary tools, continue the struggle against colonialism, assimilation, and dispossession of our lands and resources. This is for honour, respect, and resilience, and we’re going to do it through some fun and laughter.”