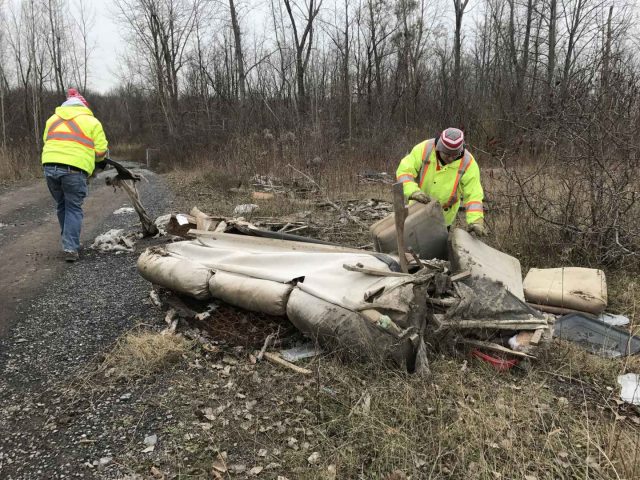 Workers from the Mohawk Council of Kahnawake’s Waste Management department were on the ground this week, cleaning abandoned trash along the Seaway. (Jessica Deer, The Eastern Door)

Although crews from the Mohawk Council of Kahnawake’s Waste Management Department carried out a weeklong cleanup along the Seaway road, the effort only made a small dent in the amount of trash.

“We’ve cleaned up maybe one area, and some smaller stuff along the road, but there’s just so much stuff out there – we weren’t able to do as much as I hoped for this week-long endeavor,” said Holly McComber, waste management program manager.

“It’s everywhere – maybe we made a small dent but there’s a lot more material left behind. It’s starting to freeze up on the ground, so we can’t continue.”

McComber said she hopes the initiative will spark change in how people dispose of their waste.

“You have to own your waste. You made it, you have to figure out how to get rid of it. The whole community can’t be responsible for that,” she said.

For several decades, the five-kilometer stretch of road along the Seaway has been used by locals and non-local alike to dump garbage, according to McComber.

“It’s always been a problem,” she said. “We need to regain our pride and respect. It’s so disrespectful for the community, and we’re not setting a very good example. We’re telling youth that our community is nothing but a big garbage dump.”

McComber said much of the garbage picked up this time around was construction demolition and old furniture. She feels it stems from recent policy changes in what kind of materials are accepted at the Transfer Depot.

“I think they get mad because there’s rules when it comes to garbage. You can’t just throw anything anywhere – we’re forced to recycle and to do things in a different way. We have to become more responsible for our waste, and put a little effort into it now,” she said.

According to Kahnawake’s 2015 waste management plan, construction renovation demolition materials are accepted at the Transfer Depot if the homeowner has completed his or her own small home renovation, but not when a contractor completes the work.

“People have to realize that’s there waste, that’s there responsibility and we can’t ask the community to pay for their waste disposal because these are community dollars being spent to get rid of this waste,” said McComber.

“It shouldn’t be the community’s responsibility to get rid of your old deck, or your shed that you want to tear down, or your fence – we need to learn how to accept our responsibility for the waste that we produce.”

So what should community members do if they take on these types of projects? McComber suggested bringing them straight to a facility like Mélimax in Chateauguay. As for old furniture – many items are accepted during the weekly curbside pickup.

“If it’s a kitchen table that’s just wood, those can go in the bin at the Transfer Depot, but a couch or mattress – all those items go on the back of the garbage truck,” said McComber.

More information on the Waste Management Department’s best practices can be accessed on their website, Facebook page, or by calling 450-632-5825 extension 58481.