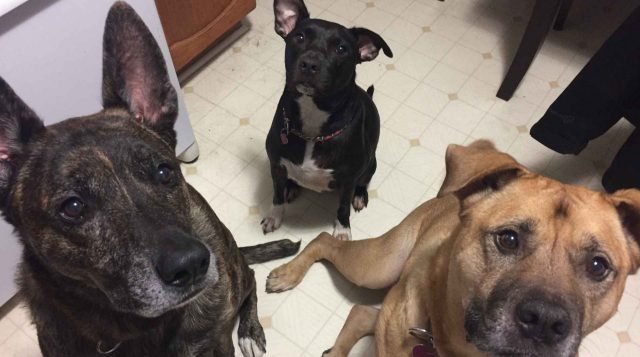 People discuss the issue of loose dogs with much fervor and anger – and it’s good to talk about it in a respectful way that makes the community safer. Some will dig in and vow to never tie their beloved pet up while others keep them safe by keeping them in the house.

I wanted to write something from my perspective about our three dogs, to offer a different take on the highly-charged issue, and demonstrate how tricky it is dealing with animals who have such a wide range of personalities.

It’s important to note that a long time ago, sure, our animals ran free, but in modern times, there are too many hazards that lie outside our doors and if we love our pets, we must protect them.

If we want to build a community based on mutual respect and kindness, we must protect our neighbours from our dogs too. Chili is a kind and caring brindle Dutch shepherd who is naturally nervous. His first few weeks of life are unknown because he ended up at a shelter (someone in town owned him before that), but what is known is Onawa, his loving istá, saved him, creating an indelible bond between them eight years ago.

So when people come around, he barks. He gets nervous and sometimes he nips. He can bare his teeth and scare people.

But is he a bad dog?

He’s beautiful, loyal and cuddly. He just has personality traits we have to keep an eye on, certain things we have to do to keep him and others safe.

So we don’t let him loose, no matter what, and we tell people to keep their hands in their pockets and away from him until he calms down and sniffs them.

Basically, we watch over him so he doesn’t get into any trouble. We also don’t want anyone to get hurt, obviously.

Everyone in and around old Kahnawake and the St. Francis Xavier church area where we used to live knows Scarlet, and she was brought to us because she was a loose dog.

She was caught a record (at least we imagine it must be) seven times and put in the puppy slammer.

She was a career criminal, always getting nabbed for the same thing – out on the street alone, strutting around like nobody’s business, sometimes going after cats, or rabbits, or cars.

So when Animal Protection wouldn’t give her back to her original owner, we got a call and were offered to take her in, and we did with open arms.

She has her own issues, of course, but she’s a generally good dog – strong as an ox and can be difficult to walk on a leash, but loyal, loving and, for such a big girl, is a giant baby who used to call our couch her own in our old apartment. And then there’s Caic.

She is trouble, we won’t lie. Stay far, far away.

She is also the boss of the house and nips and growls at the big dogs, keeping them in line.

They fear her. She fears us.

It works out well but you have to keep a very close eye on her – especially at feeding time.

She won’t go up to you and bite you (she’s always on a leash anyway), but she will bark, growl and try to intimidate you, just to see what you do.

She tests. She sneaks. She’s very intelligent and her vocabulary is second only to Chili’s in the amount of words she understands.

Deep down, her mean streak is because she’s scared.

She had the roughest upbringing, by far, and when her angel of a foster mom Pauline finally brought her into her home, she was saved.

She had carved out a dirt hole in her yard to stay cool under the scorching heat of the Turks and Caicos sun before that. Who knows what she ate if Pauline didn’t feed her.

She certainly wasn’t loved, at least not in the way she deserved.

She’s a Caribbean mutt the locals call Potcakes, the name derived from the food the people scrape from the bottom of their cocking pots to feed them.

You won’t find a purebreed among them, with different colours, breeds, looks and attitudes, but they are generally the same size and don’t go over 50 pounds.

Her attitude didn’t come from us beating her, or neglecting her, but by having a tough start in life and developing a façade that protects herself first and foremost when trouble approaches – even though she now has us to turn to.

If anything, we spoil her, but also discipline her regularly when she needs it because, well, otherwise she’d run the house – and you don’t want to see what that would look like.

Once she gets to know you, she’s playful, a total spooning snuggle bunny, and the cutest little forever-pup.

So the argument that a dog is either good or bad based on their upbringing doesn’t tell the whole picture. In fact, it’s a cop-out.

They are dogs. Animals. Creatures who can’t tell us what they want/like/hate/feel.

They have certain proclivities, leanings and attitudes – just like humans.

They might be moody, ornery, happy and playful mere minutes apart – like children – but in the end all they want is our love and affection – and treats.

Oh so many treats.

Caic found a way to open the food container with her mouth (the bite marks were a dead giveaway) and she much prefers her brother and sister’s food to hers, of course.

So we pile heavy bins on top to make it impossible for her to get in. But she tries. She will always try.

That’s why we love them. We can relate to them and our similarities, but adore their differences.

And that’s why we will do anything to keep them safe, no matter how much money they cost, the things they ruin, and the quirks they have.

They need us as much as we need them.