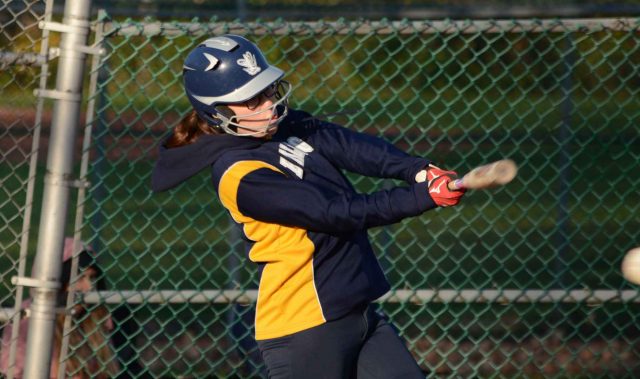 Sarah Jacobs was a force at the plate for Billings in the GMAA softball finals capping her impressive day off with a two-run dinger in the sixth to put the game out of reach for John Rennie.

It was cold in the air, but hot at the plate for Howard S. Billings’ Blazers girls softball squad that handled a short-handed John Rennie High School team in the GMAA finals Wednesday.

Billings showed its collection of bats early knocking five runs in (the maximum allowed per inning) for their first trip to the plate after Rennie had scored two.

After a scoreless second inning, Billings scored another five in the third suggesting the Blazers bats were going to run away with the game.

Rennie bats stormed back, however, and scored five runs of their own, and at the bottom of the fifth it was 11-8 Billings.

Then Sarah Jacobs stepped to the plate.

Jacobs had been crushing balls all game, and saved her best for her last trip to the plate when she crushed a two-run homer to push Billings ahead 14-8 in the sixth.

“It was amazing,” said Jacobs, who was named the game’s MVP. “It felt so good.”

Billings held firm and won yet another banner for the softball giants.

Rennie put up a valiant fight, and coach Gary Elson knows it could have been better. Four of the team’s top players were not able to make the game due to other commitments, and Rennie, it appears, is one to watch in the future.

“They put up a really good fight, and it’s a really young team,” said Elson. “Most of our team is grade eight and grade nine, so it’s really good for the future.”

For Billings’ coach Walter Kurzydlo, the team’s perfect season was all about never letting a hiccup get in the way of a win.

“The girls are amazing,” said Kurzydlo. “They played hard all season, injured, everything’s been great (and) it’s got them to this.”

Jacobs was joined in the outfield by Kahnawa’kehró:non Kallie Goodleaf, who was also effective throughout the season.

“I love playing with the Billings team,” said Goodleaf. “We play good together, and we know how to communicate with each other. We’ve won every game since I started playing on the team, which is really good!”

The girls proved, as Billings seems to do every year, that the yellow and blue girls on the diamond are a force.