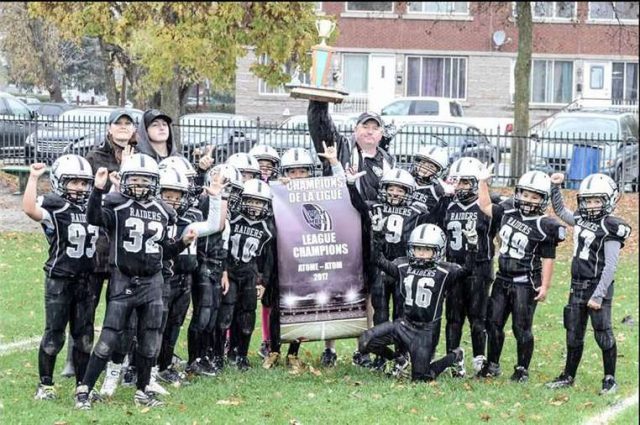 For the second year in a row, the Chateauguay Raiders are vying for the Peewee football championship.

The one team they lost to was the very same Vikings.

“This team that we’re playing in the finals is the team that beat us. So, we’re really just trying bring our best game and get revenge on them, and hopefully beat them this time,” said Phillips.

“When we lost to them, one of our best players, our running back, was missing. I think that really hurt us because he plays well on defense as well as offense and not having him there, it hurt. Hopefully, we’ll do better this time.”

During playoffs, the Raiders won 65-18 against the Sun Youth Hornets in the quarterfinals, and last weekend won 6-0 against the St. Hubert Rebelles in the semi finals.

Whichever team will be crowned Peewee champions this weekend will play for an Inter-Provincial Championship against the NCAFA Ontario Peewee Champions the next weekend November 18 in Ottawa.

The Peewee team wasn’t the only Raiders team to boast an impressive roster of Onkwehón:we players this season. The Raiders fielded two Atom teams this year, with several local athletes on both.

The silver team, which included brothers Jacoby and Curren Cross went undefeated in their regular season earning them the title of league champions for 2017.

“The season couldn’t have gone any better than it did. We were the only organization in the whole league that has two teams, so each Atom team was half as strong as the rest because we only had half a team,” said head coach Dale Cronk O’Neill.

“I can’t believe we went undefeated. There were so many games where we were down by two, and came back, two, in the last third seconds.”

During playoffs, The Raiders beat the Greenfield Park Packers 40-18, but were eliminated during their second game against St. Lazare Stallions after losing 24-6.

“We played them the eighth game of the season, and we had a really hard time with them. We won with the second to last play in the game,” said O’Neill.

“The only team I didn’t want to face was this one, because they’re tough. They’re like a big white farm boy team, and my kids were scared when they played them.”

The Bantam team’s season wasn’t as great. The Bantams ended their regular season 3-1-6, and were eliminated in the first round of playoffs 24-7 against the St-Leonard Cougars. The team included Michael Phillips Jr, Rahsakaienhtha “Bucky” Cross, Rotetshenhatie McComber and Damien Grand-Louis.

“The 2017 version of the Bantam Raiders greatly improved from the previous season. The future looks bright for the program with lots of strong players moving up from an excellent Peewee team. The coaches look forward to take more steps to bring the Bantam Raiders back to their winning ways,” said assistant coach Corey Cook.