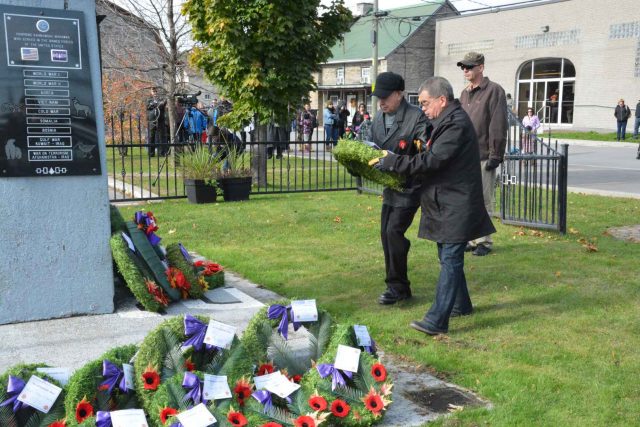 Mouchie Goodleaf and his father Buddy lay a wreath for Buddy’s father Angus Paul Goodleaf, a veteran of the First World War, who was the last veteran of that conflict from Kahnawake to pass away. (Jessica Deer, The Eastern Door)

The sun was shining Saturday afternoon as Kahnawa’kehró:non gathered around the cenotaph to honour the men and women that served over the years in the Canadian and American armed forces.

At 1300 hours, or 1 p.m. civilian time, veterans marched like clockwork to the pipes and drums of the Black Watch (Royal Highland Regiment) down the River Road for the Royal Canadian Legion Mohawk Branch 219’s annual Remembrance Parade.

“Every year, we gather here to pay tribute to honour those men and women who have served in our armed forces. Every year, we lose veterans. Since we gathered last year, three Kahnawake veterans have passed on,” said Mark Goodleaf, president of the local Legion branch.

“They are here today in spirit, and never will be forgotten,” said Goodleaf, to the crowd of over 100 veterans, their families and community members.

Kwahará:ni Jacobs sang the Canadian and American national anthems, and clergy from the Catholic and protestant churches recited prayers in English and Kanien’kéha.

Goodleaf noted many of the dignitaries who were in attendance for the ceremony, including Mohawk Council of Kahnawake chiefs Christine Zachary-Deom, and Kenneth McComber, the Quebec provincial command past president Comrade Norm Shelton, and US consul general Robert Thomas.

The city of Montreal’s new flag was raised below the Confederacy flag for the day. Zachary-Deom said it was in honour of the consideration the community has been given in the recent months by the city.

“As of September 13 of this year, the central symbol of the city of Montreal’s flag is that of the massive great white pine – the symbol of peace and harmony. This is the symbol that was selected by the committee that dealt with changing the flag of Montreal,” she said.

Zachary-Deom was one of four Onkwehón:we to sit on the committee to choose the flag’s new symbol to represent Indigenous Peoples.

“I was so thrilled to see that mayor (Denis) Coderre had such a large input into change that has occurred in Montreal with respect to Aboriginal people, of which there are 26,000 in Montreal itself,” she said.

“The flag of Montreal used to be a big red cross symbolic of Christianity, and all four other symbols represent Christian countries. In the middle where it used to be the cross, is now a circle representing Otsira’kéhne, which is Hochelaga, it also means the place of the council chiefs met to discuss. On that mountain is also the great white pine, which is a symbol of peace, which people should seek out in order to find shelter under the great pine.”

The annual ceremony ended with the placing of wreaths by dignitaries, veteran’s family members and veteran’s organizations.

“Let us remember those who have lost their lives while serving Canada and the United States, in past wars, and those who are serving now in the war against terrorism,” said Goodleaf.

“Let us keep in our thoughts for those who are deployed around the world away from their families and loved ones. We pray for their safe return home.”