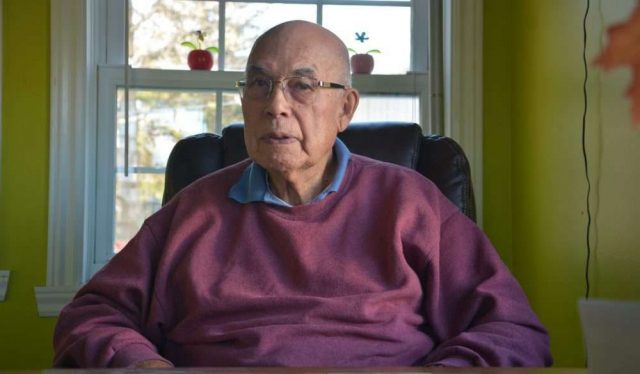 Robert Montour Sr. served for two years in Korea in the early 1950s and will take part in the Remembrance Day parade. (Jessica Deer, The Eastern Door)

Tomorrow, for the first time, Kahnawake’s Legion will honour veterans of the Korean War that ended 64 years ago, and left an unstable and unfinished truce on the peninsula where the two Koreas remain technically at war to this day.

Robert Montour Sr. was among the men from Kahnawake who served in the American forces during the war, and spoke to The Eastern Door about volunteering as a young man, and serving two years in the conflict.

Midway through basic training in the winter of 1951, he was given his assignment.

“They send you where they want you, and I became a cook,” said Montour. They sent me to cook school in South Carolina.”

From South Carolina, Montour came home to Kahnawake before going to Detroit to Chicago to Seattle along the rail.

From Seattle he jumped a boat to Sasabo, Japan (near Fukushima) to Pusan in Korea then to Seoul.

“When we first got into Seoul, the whole town of Seoul was about this high,” said Montour gesturing to about two feet from the ground.

“Everything was busted up. You couldn’t see anything,” he said. “I felt so sorry for the people, the kids, women, hardly dressed and they’ve got the kid, his head is hanging, hungry.”

Much of the destruction resulted when the US-backed southern forces pushed the Soviet-backed Democratic People’s Republic of Korea in the north back to the 38th parallel where much of the conflict occurred.

“The US really busted it up when they went through there,” said Montour. “(General Douglas) MacArthur’s boys, they had no choice to do that because you either annihilate the communists or they keep coming.”

Montour arrived as a 19-year-old in 1951 after the initial advance had taken place.

He only spent a day in the capital on a resupply run, but remembers it well.

“One Korean gave me a letter that said, ‘bring me this,’” he said. “He wrote it down in Korean, and told me where to go, it was a market.”

In summer, Korea is very hot, and the sight of an open market full of freshly slaughtered meat covered in insects was something Montour did not want to be near for very long.

“Oh my god. This guy was selling pork, and it was all black with flies,” said Montour. “We got our pepper, and got the hell out of there. We didn’t stay long.”

“It was nice when the spring broke, green, but you had to watch where you walk,” said Montour. “You could see a lot of places where they had the mines, but they were dismantled and left alone.”

Finally, Montour was transferred to the Goeje Pass on Korea’s east coast, spending his entire final winter in the country.

“It wasn’t a cold place,” said Montour “I spent the rest of the winter until I left. The snow wasn’t bad, but it was noisy. Where we were camped was called the artillery valley. I’ve never seen so many artillery there.”

After picking up hepatitis, Montour began driving a Jeep for a captain and other officers, as he was not allowed back in the kitchen.

Driving the Jeep gave Montour the chance to see Debbie Reynolds and other popular entertainers of the era during United Service Organizations (USO) shows. There was one star, however, that he missed out on.

“The only one I didn’t get to see was Marilyn Monroe,” said Montour. “I missed it. It was too far back. He (the captain) didn’t want to go that far.”

The Korean conflict was primarily contained to the 38th parallel on the Korean peninsula (now the demilitarized zone between North and South Korea).

The Korean War is often described as America’s forgotten conflict wedged between the success of the Second World War and the enigmatic end to the war in Vietnam.

“I forgot myself,” said Montour Sr. “I was glad to get out of there.”

After serving for two years, Montour was released from the service in April 1953 and went back to slinging steel out of Local 40 in Manhattan.

“That was nice,” he said. “To find out you’re going home and you’re not going to come back, not to listen to the sergeants.”

Looking back, he has no regrets about joining the service and serving the US Army for two years.

Veterans of two conflicts to be honoured

Tomorrow, the community’s veterans will walk through Kahnawake, as the annual Remembrance Day parade honours those who have served both sides of the border in the armed services.

This year, parade organizers decided to honour the veterans of the Korean and Vietnam wars.

Part of the impetus came after Legion members realized they had not done a full commemoration for Second World War veterans before it was too late and the community lost its last one.

The Legion worked to find as many Korean veterans as possible, including Leon Martin, who was killed in action during the conflict that started June 25, 1950 and ended July 27, 1953. In all, the Legion has found 24 veterans, who served in the conflict, including James Jacobs, Robert Montour Sr., Stuart Phillips, Jackie Leclaire and Walter Beauvais, who are still with us.

Montour Sr. was happy to hear the Legion would be honouring him.

“That’s good,” said Montour Sr. “I’m surprised. A lot of them that were there are gone already. I’m the oldest one left.”

The Legion will also honour the 33 living Vietnam veterans tomorrow and the 34 who have passed on.

The parade will start at 1 p.m. and special presentations will follow at the Legion, including giving special challenge coins to the veterans being honoured.

Before the festivities tomorrow, Kahnawake Shakotiia’takehnhas Community Services will host a veteran’s breakfast this year.

“They called up and said, ‘hey. We’d like to do a breakfast. Do you think you guys would be interested?’” said Deer. “I said, ‘not only yes, but hell yes! We’re not going to pass up an opportunity not only for a breakfast, but the acknowledgement.’”

Deer is excited that he and the other veterans will have a pleasant way to start the day before they visit the cemeteries in Kahnawake, and begin the parade at the cenotaph.