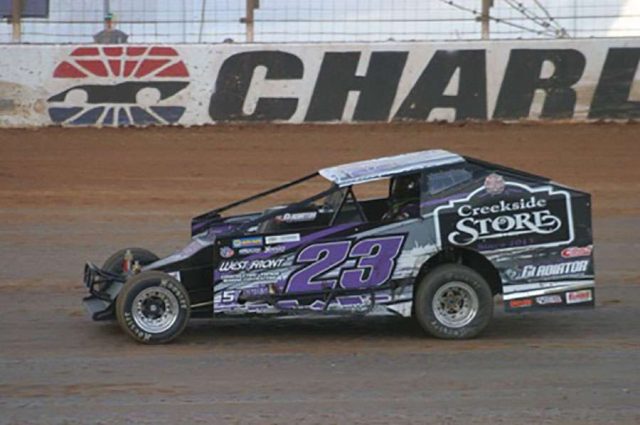 Mike Stacey and his no. 23 racer competed among dirt racing’s ultimate short-track showdown over the weekend.

The OneDirt World Short Track Championship roared into The Dirt Track at Charlotte Motor Speedway from October 27-28 with eight divisions dueling. Competing in the Sportsman Modified division, Stacey finished second in his group for qualifying race, and third in his heat on Friday, transferring him to Saturday’s championship event.

“I think we did better this year than last year because the track was a lot faster. They put new clay down, and the surface wasn’t the same as last year,” said Stacey, a Kahnawake Peacekeeper by day.

“There were only spots for 26 cars to make the show, and there were 45 cars there.”

Stacey finished the feature event in 11th, but had an impressive second-place finish in the all-star race later in the night.

Stacey has been dirt racing in Sportsman Modified for six years, competing in over 50 races a year between April and October. He drove street stock for three years prior, and drag racing before that.

He said he enjoys the rush of the sport.

“The competition, the speed. Pushing the limits of a car to the brink,” said Stacey. “We’re always sliding, we go straight away, then we’re sliding sideways through turns. If you’ve ever watched ice racing, it’s sort of like that, but a lot faster – we’re going 80-90-100 miles per hour down the straight.”

Last weekend’s race at the Dirt Track marked the final event for the season for Stacey and his crew. He said his performance will give him a big boost of confidence for next season.

“Finishing second in the all-star race, among all the top guys, just makes me more confident that we could run a lot better next season because we’re racing with the top guys, keeping up with them, and we’re passing them now,” said Stacey.